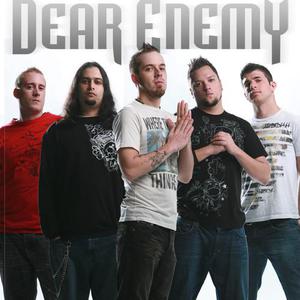 In nature, the "Dear Enemy" effect occurs when powerful rivals agree to cooperate for the greater good rather than slug it out. That phenomenon happens all too rarely in the ultra-competitive music world, but great things can happen when it does, and Atlanta's Dear Enemy is proof. There are at least two bands with the name "Dear Enemy". 1. A band from Atlanta, Georgia Dear Enemy formed in early 2005 from the ashes of some of Atlanta's best-known local groups.

There are at least two bands with the name "Dear Enemy".

1. A band from Atlanta, Georgia

Dear Enemy formed in early 2005 from the ashes of some of Atlanta's best-known local groups. They were motivated by a single desire: to completely eliminate egos and distractions, and make the hardest, most direct music they can, with the broadest possible appeal.

The difference between their past projects and Dear Enemy is evident on the group's 2005 demo, produced by Brian Parker. Songs like "Days Of Regret" and "Rise Up" go straight for the jugular, as jackhammer riffs and precision rhythms explode into melodies that leave you no choice but to pump your fist and sing along.

Already in their short life as a band, Dear Enemy has opened for such national acts as Chevelle, Three Days Grace, Dark New Day, Hoobastank, Nonpoint, Silent Civilian, Burn Season and more. They continue to make waves reaching fans all over the world with their unique promotional techniques, their persistance, and their overdriven work ethic. It doesn't hurt that the band is known as one of the most approachable in the scene. The future looks bright for this powerhouse quintet and the sky is the limit to what they can do with their hard hitting riffs, memorable vocal melodies and undeniable live show.

In the meantime, Dear Enemy plans to follow its own motto, and keep its friends close, and its enemies dear. Except by the time everyone gets a listen...the band may not have any enemies left.

The Australian band Dear Enemy were named from a Ginger Meggs comic strip?the hero receives letters from his rival which are always addressed to 'Dear Enemy'.[1][3] The Melbourne band formed in 1982, with an original lineup of vocalist Ron Martini, guitarists Chris Langford and Les Barker (ex-Benders), keyboardist Martin Fisher (ex-Little Heroes), bassist Peter Leslie (ex-Little Heroes) and drummer Ian Morrison.[1] Prior to taking the name Dear Enemy, they had played together as a covers band called Stonewall.[4]

The band picked up a strong following on the live circuit and in 1983 signed a recording contract with the American label EMI/Capitol - one of the first Australian bands signed direct to an overseas label.[4] They recorded their debut album Ransom Note in the United States under the guidance of producer Peter McIan (Men at Work, Mondo Rock) - in fact the band were signed with the condition that Peter McIan oversee the recording sessions.[4] The impressive album generated three quality singles, the first of which "Computer One" (which was written in America by Langford and Fisher) proved to be Dear Enemy's one and only major hit, peaking at No. 5 on the Australian charts in late 1983.[2] The follow up single "The Good Life" stalled at No. 39 a few months later[2], whilst the slide continued with the third single "Kids On The Street" failing to chart. Ransom Note sold more than 25,000 units and reached No. 15 on the national album charts.[2]

Dear Enemy released a new single a few months later with "New Hero", which featured on the soundtrack to the Australian motion picture Street Hero.[5] The single however only reached No. 93 on the charts.[2] A couple of lineup changes, with Joey Amenta replacing Barker in April, 1985, and two more flop singles, "Stay" and "You're Right, You're Right", followed over the next four years before Dear Enemy's system crashed and they called it a day at the end of 1988. Dear Enemy did record tracks for a second album during this period but due to contract and legal problems the album didn't see the light of day.[4] Ron Martini also released a CD entitled Big Night Out in 1996 with backing band The Missiles Of Love. Ian Morrison went onto perform with Goanna.

In 2000 EMI released a CD Best of Dear Enemy (Ransom Note and Beyond) which was a compilation of all the band's releases, this was followed in 2004 by a Best of, which was basically Ransom Note and the inclusion of the single "New Hero".