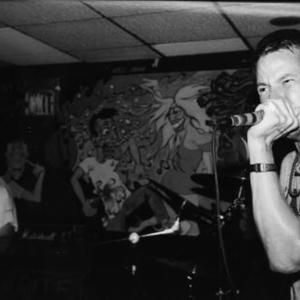 Deadguy were a metalcore band from New Brunswick, New Jersey and active from 1994 to 1997, when they recorded for a number of labels including renowned hardcore label, Victory Records. The following bio is taken straight from Deadguy.org: One night in the summer of 1994 Dave and Crispy went to CBGB's in NYC to go see Cows and Unsane. It was hot. Cows (for those of you who aren't familiar) are pretty entertaining, in fact I'd say they should have been much more popular than they were. Unsane had just reformed with Vinnie on drums and the other 2 original guys still playing.

The following bio is taken straight from Deadguy.org:

One night in the summer of 1994 Dave and Crispy went to CBGB's in NYC to go see Cows and Unsane. It was hot. Cows (for those of you who aren't familiar) are pretty entertaining, in fact I'd say they should have been much more popular than they were. Unsane had just reformed with Vinnie on drums and the other 2 original guys still playing. They were so unbelievably heavy (and loud) and so unlike the crappy bands in New Brunswick, New Jersey it seemed only natural to go buy all their records and start ripping off the cool parts and making a band around it. Admittedly this might seem kinda lame, but who cares, we just wanted to rock. No one ever believes this story but it is literally how the band started, if there had been something better on TV that nite, none of this would have ever happened.

So you're thinking, "Yeah, I guess they sounded a little like The Unsane, but not really." That's true, we found that The Unsane songs although cool and heavy weren't very hard to play, that's when we discovered a band from Tennessee called Today Is The Day (I had bought the cd a few weeks earlier), who we could rip off even more than The Unsane. The first TITD album, Supernova, is still one of my favorite records of all time. It's so heavy and evil and the music is so crazy that there wasn't even anything to compare it to. If you listen to 6 Dementia Satyr and then Black Dahlia (in that order) and then listen to Druid from our White Meat 7-inch you'll see the inspiration (basically we stole it, Cool, huh?).

Anyway, Crispy and I were housemates, along with a whole bunch of other knuckleheads at 149 Somerset Street, a house that became the practice space for Deadguy as well as a local punk rock venue. We knew we needed other people in order to become a band so we went through our roommate list and found 2 who could play instruments; Pops (a.k.a. Tim Naumann) and Bruce, (who later went to France and came back nuts, seriously.) So we started teaching Pops how to play bass, since that was what Crispy knew how to play. Then we had 2 bass players, so Crispy went and bought a guitar and became the guitar player. We were a cool power trio, like Rush, or Triumph, those 2 shared the vocals and it was cool. Somewhere along the lines we got suckered into bringing another singer so that Crispy and Pops could just play. At the time it seemed like a good idea and for a while it worked, unfortunately it became a real hassle.

We played our first show in the basement of 149 Somerset Street a few months later, I think we had 5 songs which we hadn't even named. Quick side note here: the origin of the name Deadguy came from the John Candy movie Only the Lonely where he's carrying around dead bodies and people keep asking "Who's the Deadguy?" So the show was kinda weird, I remember there being way too many people there and us being so loud that every one of them were covering their ears to escape the feedback and noise coming from us. It was a success though, we made a bunch of t-shirts and people wanted them and people seemed to sorta like the noise factor, when I say noise, I mean shit noise that makes your head hurt.

At some point we moved to another apartment and built a practice space/bedroom. Crispy and I worked on new songs and parts pretty much every night. Somewhere before that happened we went and recorded the White Meat 7-inch at Trax East in NJ, I still like the songs on there, but the guitars should have been louder, overall it was a cool record and there wasn't a whole lot of bands going for that sound at that point, so we were cool. That record came out on Dada/Popgun, a local label.

The White Meat 7-inch got us some good press and notoriety so we started playing all over the East Coast and pretty soon had a good following (I think kids liked us cause we made new t-shirts all the time). After a show in NYC we met up with the jokers from Engine/Blackout Records who put out the Work Ethic 7-inch as well as a CDEP that contained both 7-inchers.

The guys at Engine were pretty screwy after a while. We had gone and recorded the Fixation album and they couldn't pay the studio for it, so we bailed and went to Victory. At the time Victory was pretty much Tony and a few lackeys, he put the record out in February I think, even though it had been done in October.

The first tour sucked, the booking agent was a complete idiot and she screwed up the whole West Coast, so by the time we got to LA we only had one show left in Seattle. You might say that tempers started to flare as certain members of the band were treating this tour as a vacation while others of us were there to rock. (Never mind we were living on $2-$5 a day, whereas they had a bunch of money from their parents or wherever and we were eating bread sandwiches.) The whole thing came to a head at the home of our former housemate Gabe, the poor bastard never knew what happened. We got to his house and in about 15 minutes, three of us (Dave, Crispy and Pops) were not talking to the other 2, we were out of money, out of shows and they were accusing of us of "ruining their good time" because we didn't want to stay in Seattle for 3 extra days. We drove back to NJ only stopping for gas. 50 hours, basically non-stop with the 3 of us against the 2 of them. After that they decided to move to Seattle. We decided they were jackasses and stayed in NJ.

About this time, we switched Pops from bass over to vocals; it took a while for him to really learn how to scream and breath, but in the end I like his voice a million times better. We also recruited our former roadie (and Destroyer of Babylon) Tom Yak to come and play 2nd guitar. At that point the bass player search began, it sucked. Eventually the mighty Rob Leecock convinced us to let Jim Baglino join, we had been hesitant since Jim was in Human Remains, but those guys were pretty dysfunctional, plus Jim wanted to play bass, so it worked out. We started practicing at his studio in Red Bank and that's where we wrote most of the songs for Screamin (although we still played in the basement).

Somewhere within this whole story we met lots of interesting people and played with lots of great bands (and plenty of terrible ones) including Today Is The Day, so when it came time to record we called Steve Austin, who flew to NJ to record Screamin with us. It was an experience and I think the record is great, that was the sound we were always going for and I think there wasn't anything left for us after that recording.

The next tour was set up by the people at Victory, we went out with Bloodlet for about 2 months over the whole country. This tour was much better; we actually got paid, had shows and all got along. Along the way we fought a midget, crashed into some foreigners, Crispy chipped his tooth on Jim's bass, we lived in Orlando for a week and had a great roadie, named Samson. Despite the fact that this tour was good, it was grueling both physically (Pops and I lost 10 pounds each) and mentally (Tom decided he was no longer a rock star). Young Tom's final shows were cool, the first one was with Misfits and a whole cast of others at the WSOU anniversary in Asbury Park, NJ, there were about 4,000 people there. His last show was at the Wetlands in NYC for CMJ, we had to stop at Jim's dad's house on the way in and as we were sitting outside a bird dropped dead out of the sky right at our feet, I think it was an omen. Tom took to the trees after that and began a reclusive lifestyle.

We continued to play around the East Coast (now with our friend Chris from Doc Hopper on guitar), and began an unbelievable epidemic of breaking down at every possible point. We played our last show in New Brunswick in May of 1997, Jim didn't want to stop being a band and he got mad at us at that show and no one heard from him for about 3 months.

People often wonder what happened to everyone after that; Jim owns a rehearsal studio in Red Bank, NJ and continues to rock. Chris from Doc Hopper also continues to rock. Pops went back to playing bass and finally is finishing college after 10 years. Crispy became a professional gambler for a while but stopped when his car blew up mysteriously one night (seriously). Tom took to the trees as they say, kind of like a survivalist who lives in the woods and I (Dave) have been on a quest to become the first punk rocker to become an internet millionaire.

I Know Your Tragedy

Screamin' With the Deadguy Quintet

Fixation On A Coworker