Dead Inside the Chrysalis 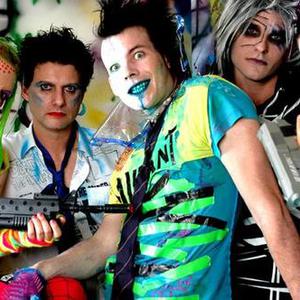 The next mutation of Sydney new-wave hyper-glam punk outfit Dead Inside the Chrysalis continues with the recording of their new EP - CLASS OF 2099. Released in September 2006, it features the tracks - Acid Night at the Prom, Tranzsister Oblivion, Ulysses is the Ultracar, Fakes and The Boy Who Couldn't Fly. An obvious departure from their last release sees the band forming a retro future sound all their own with a focus on evolving music rather than rehashing the old.

Take the chamelon changes of David Bowie, the hi-pitched howl of Ozzy Osbourne and John Lydon mixed with the pompousness of Marc Bolan and angst of Kurt Cobain, the disco-pop sensabilities of Public Image Ltd, Devo, Duran Duran and Gary Numan, the electro-dread-sludge dirge of Type O Negative and Deadsy, throw in some riot punk attitude and programming from Iggy Pop, Alien Sex Fiend, Sigue Sigue Sputnik, Sex Pistols and Atari Teenage Riot and have it produced at a hallucinatory party hosted by Andy Warhol filled with the cast from Toxic Avenger and you might just get some idea of what DITC is about.