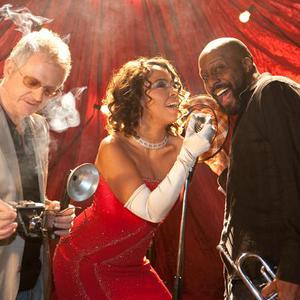 De Phazz is a downtempo jazz ensemble integrating modern turntablism and elements of soul, Latin, trip hop and drum and bass into a lounge music sound. De Phazz is led by Pit Baumgartner, a German producer who changes his crew for every new album. Some of the more permanent members are Karl Frierson and Pat Appleton. Since the release of Detunized Gravity and Godsdog, De Phazz have appeared on the radar of listeners of equally innovative and sample-driven jazz by the likes of Amon Tobin and The Cinematic Orchestra.

The band has released records on Mole Listening Pearls and Universal Jazz Germany along with single releases on Edel Records and United Recordings, and also remixes existing material.