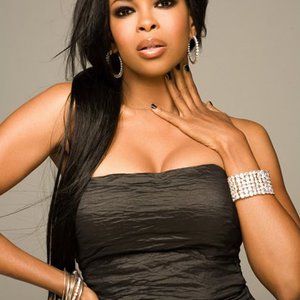 DAWN ROBINSON -the funky bio- Dawn Robinson has sung and performed her way ahead of the pack. She has managed to stand out from her former projects, the massive entertainment dynasty ?En Vogue?, the all-star Grammy nominated line up of Lucy Pearl, & several platinum & multi platinum soundtrack contributions from Eddie Murphy's ?LIFE? to his equally impressive blockbuster ?Dr. Doolittle?. Always looking to explore music's vast wilderness of creativity, Dawn has moved out on her own as a solo artist.

Much like the great Tina Turner, she knows where the real action is and has taken control of her star power to continue her journey towards legendary status. What does a future Rock & Roll Hall of Famer look like? Just check out Dawn Robinson. Growing up with musical influences such as The Beatles, Sly and the Family Stone, The Carpenters, Janis Joplin, Earth Wind & Fire and many others, Dawn Robinson is musically well rounded. In 1989 Dawn auditioned for what would become one of the greatest R&B groups ever. As a matter of fact, in 2000 Rolling Stone proclaimed En Vogue as one of the top 5 most important female groups in the HISTORY of modern r & b music. As the lead singer on most of the groups hits Dawn soon would become the most visible in the iconic quartet. Selling over 28 million records world wide En Vogue had hits such as ?Hold On? ?Free Your Mind? ?Giving Him Something He Can Feel? and ?Don't Let Go?. After nine years with EnVogue, Dawn got a call from her childhood friend from the Bay Area, Raphael Saadiq of Tony Toni Tone'. Saadiq made her an offer she couldn't refuse after which she promptly turned down a deal with RCA Records to lead the trio, Lucy Pearl. Constantly evolving, Dawn, yet again had reinvented herself and was ready to soar to higher heights but after heartbreakingly similar results to her experiences in En Vogue left her financially uncompensated for her contributions to the 2 top 40 hits AND the Grammy nomination, Dawn found it was time to take her act solo. With almost 20 years of worldwide hit making, a legitimate argument at proclaiming herself one of the most recognized voices in history, 5 Grammy nominations, 15 MTV Video Music Awards, a Sammy Davis Jr. Lifetime Achievement Award, 4 American Music Awards, countless NAACP Image Awards, 12 Soul Train Awards, & the business savvy of an entrepreneur holding the patent to the light bulb, Dawn is now poised to make a comeback that will rival & bring to mind the successes of Tina Turner & Mariah Carey! No doubt if the world were to get two words of advice that would best sum up Dawn's reentry onto the musical landscape of today, those two words would certainly be ?GET READY?!