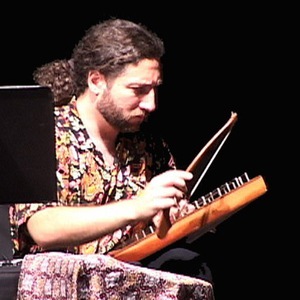 Composer, educator, and author, David Dvorin received a B.A. in Music Composition from the University of California, Los Angeles, and a M.F.A. in Music Composition from the California Institute of the Arts, where he studied with Morton Subotnick, Stephen L. Mosko, and Wadada Leo Smith. While attending both schools, he worked professionally as a film, multi-media and television composer, and was nominated for an Emmy Award in the category of Outstanding Achievement in a Craft: Music Composition, as an undergraduate.


David's talents as an electro-acoustic composer has led to multiple collaborations with composer Terry Riley and the Kronos Quartet, most notably with the pieces ?Cusp of Magic? and the NASA commissioned piece, "Sun Rings". The latter received its premiere in October 2002, and continues to tour the world as a distinct part of the Kronos Quartet's repertoire. His last CD release of original compositions, ?With(in)communicado?, has received much critical exclaim and airplay, both internationally and throughout the United States.


In addition to his musical activities, David has worked as a consultant and education specialist for numerous music software companies including Native Instruments, Emagic, and Apple Computer. His textbook, Logic Pro 8: Beyond the Basics, first published in 2005 and now in its second edition, has been adopted by educational institutions worldwide. As an educator, David has served on faculty at Sierra College and is currently a professor of music composition and electronic music at California State University, Chico.