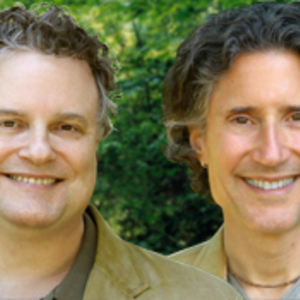 29 Years of Music with Vision David and Steve Gordon are innovators. Over the course of their 29 year career they have relied on their multi-cultural roots and consistently pushed the boundaries of musical styles. Their albums have been pivotal in shaping the changing landscape of Healing music, Native World music and downtempo music. Both David and Steve are award-winning producers, as well as composers, classically trained instrumentalists, DJs, and the founders of Sequoia Records, which they have molded into a world-class record label since its inception 29 years ago.

David and Steve Gordon are innovators. Over the course of their 29 year career they have relied on their multi-cultural roots and consistently pushed the boundaries of musical styles. Their albums have been pivotal in shaping the changing landscape of Healing music, Native World music and downtempo music.

Both David and Steve are award-winning producers, as well as composers, classically trained instrumentalists, DJs, and the founders of Sequoia Records, which they have molded into a world-class record label since its inception 29 years ago.

Uniting their love for nature with the complimentary sounds of their gentle music has placed them in the annals of New Age and World Music as originators, trendsetters, top-sellers and award winners. Their albums capture the essence of magical places, recording the sounds of nature and blending them with beautifully composed music that reflects the beauty and healing properties of those serene environments.

David and Steve Gordon are long-standing figures in the independent new age music scene, having released their first album, Misty Forest Morning, in 1982. At the time, the brothers were session musicians with an interest in ambient music; they also were practitioners of meditation and outdoors enthusiasts. Steve explained how their interests came together. "We were backpacking once in the Sequoia National Forest, listening to the sounds of nature around us. We had this idea to create a series of recordings based around an ambient natural environment, merging that with music in a way that would enhance someone's home environment and make them feel like they were out in the mountains."

The first album featured guitar, flute, keyboard, and nature sounds, performed and mixed to evoke a sense of calm. The meditative quality in the music was no accident. David notes, "We were very much into meditation and Eastern spiritual paths. When we were backpacking, we were meditating. So we took tape recorders with us, set them up and put on headphones; then we'd sit there and meditate for a few hours and record the sound. Then we'd move to another spot and do it again. We played those tapes in the studio while we composed the music, so we tried to make the music go along with the sounds that we had found there, and bring out those feelings in a valid form."

Inspired by the tranquility of Sequoia National Park, David and Steve became a pioneering force in the realm of ambient music by using nature sounds as a part of a musical composition ? a novel approach that had not been accomplished prior. Their albums, including Garden of Serenity and Soothing Sanctuary, have been perennial best-sellers, garnering acclaim from industry professionals and finding favor with spas, yoga studios and meditation practitioners. Pulse Magazine referred to their albums as ?intimate, quiet, serene and spacious?.

In 1994 they began producing Native and World drumming music, which featured hand drums and lent a new reverence to the honoring of the Native American spirit for the Earth. Their album Sacred Earth Drums became the #1 selling New Age music album in 1994, 1995 into 1996 and remains to this day still on the best-sellers lists. With this success they continued to produce: Sacred Spirit Drums, Drum Medicine and Sacred Drum Visions.

Steve regards drumming as a centering act. "When you play a drum in a circle, where there is a life and a unity that you feel, with not only the people you are drumming with, but with all of creation - you really feel that same centered connected feeling that deep meditation can give you, and yet you're being very dynamic, and you're moving your body, and everything is entrained into the beating of the drum."

David and Steve's percussion albums, with their juxtaposition of earthy Native American rhythms and modern elements like guitar, keyboards and electronica, have defined worldbeat music and continually taken the concept to new heights. Their album Sacred Earth Drums features an organic fusion of modern and ancient sensibilities and was a #1 best-selling title for over two years following its release. Successive releases have continued to receive accolades, including Sacred Spirit Drums, about which NAPRA Review commented, "This follow-up to Sacred Earth Drums is sure to be just as big?the drumming is joyous," and Drum Medicine, which won prestigious COVR awards for ?Album of the Year? and ?Best World Album.?

The Gordons continue to stay on the cutting edge with their award-winning releases in the electronica and chill-out genres, with downtempo dance grooves and global electronica. Sequoia Groove, their sub-label, has emerged as one of today's leading sources of classy ambient music for lounging, with series like Caf? de Luna, Hotel Tara and, their crown jewel, Buddha-Lounge, helping to popularize downtempo chill music and make it accessible for a wider audience beyond the nightclub scene. The albums are all handpicked and seamlessly blended by the Gordon Brothers, each one culminating in over an hour of pure euphoria for the listener. Besides their compilation series, Sequoia Groove is also home to groundbreaking artists like Jens Gad (co-creator of Enigma) and Achillea. The Gordon Brothers are responsible for discovering well-loved artists such as Gary Stadler and have produced albums for numerous artists, including Jaya Lakshmi, Everstar, Zingaia and Sophia.

It is David and Steve's ear for positive, culturally adventurous music, as well as their versatility and think-outside-the-box mentality that has made them the industry leaders they are today, having grossed over 3 million units in sales worldwide. In fact, a recent New Age Retailer survey listed the Gordon Brothers as being in the top 5 most popular New Age artists as reported by retailers, along with artists such as Enya and Loreena McKennitt, and many of their albums have charted in Billboard. Their music continues to gain exposure through usage in a variety of films and televisions shows, like the Fox Searchlight feature Kissing Jessica Stein, the comedy The Parole Officer, and the CBS Sports Xterra World Championship.

Gate Of The Sanctuary

Music Of The Tarot