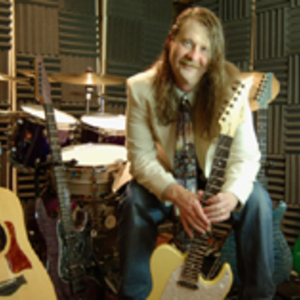 About me By Dave on Tuesday, December 6th 2005 10:00 am I was born on January 15th, 1970 (MLKs birthday). After that I learned to walk and read and play soccer. In 1982 at my Mother's urging (she figured I needed a hobby I suppose) I started taking guitar lessons. For the first two years I didn't practice much and made almost no progress. Then I got a Peavey electric guitar with a "Standard" brand amplifier and started to play a little bit more.

I was born on January 15th, 1970 (MLKs birthday). After that I learned to walk and read and play soccer. In 1982 at my Mother's urging (she figured I needed a hobby I suppose) I started taking guitar lessons. For the first two years I didn't practice much and made almost no progress. Then I got a Peavey electric guitar with a "Standard" brand amplifier and started to play a little bit more. If I turned the volume (it had no gain control) and the reverb up all the way it sort of made distortion and this to my ears then made me sound very cool when I played Dio's "Rainbow in the Dark" for the neighborhood kids outside my window.

circa 1973Around 1986 I had learned to mangle a couple of Rush songs and started playing music with some older kids who were playing a lot of what I guess is often called "Acid Rock". So then I learned how to mangle songs by Jimi Hendrix, BTO, The Eagles, Yes, Zepplin, The Who, and other bands of that era. Musical activity revolved around "Mason's Barn" which was literally a barn that we used as a make-shift night club. Kevin Mason graciously allowed us to make all sorts of noise there for unknown reasons but the whole Mason gang were great people who were always very nice to us strange musicians who would show up there and play. Since it was in close proximity to the downtown area of Hampton, NH we would sometimes garner small but supportive crowds of folks who would come listen. I think these days are remembered fondly by all who were involved.

circa 1984 with first electicBetween 1986 and 1988 (the Mason's Barn Era) I think I played in about 5 different bands that were all composed of different combinations of the same handful of musicians. None of these bands were very good, but we had a lot of fun and even created two semi-fictional "Spinal Tap" inspired films. Some of those folks were, Doug Upton (bass & keyboards) known as much for his sense of humor as his strong musical proficiency, Brian Litchfield (drums) one of the main drivers of making anything actually happen and our resident "dead head", Steve Cuncho (guitar & bass) had an amp that we literally used to make tea with, Mark Young (drums, vocals, guitar) probably the most talented guy of the lot of us and a wicked metal head, Gus Carlson (guitar) the really swell guy everyone liked to jam and hang out with, Jason Benford (bass) a fine musician and a really good guy living at a local halfway house trying to overcome substance addiction, and Dave Mills (vocals, drums) never accused of having a lack of enthusiasm.

circa 1985 with sister KristenDuring these years I got lots of helpful guitar instruction from Curt Bessette and Steve Canty. Also I, along with Phil Clute, acted as the High School sound crew for assemblies, band performances, and drama productions under the study of the fantastic Electronic Music and Choral instructor Mr. Ray. The combination of my interest in audio engineering and music in generally lead me to the decision to pursue post secondary education in that area.

So I went to college at the University of Lowell..... and it was a total unmitigated disaster. I was completely over my head on the music side of things and living with 8 other guys in off campus housing in a very bad part of town.

circa 1986It wasn't long before I was looking to transfer out of Lowell and as luck would have it Doug Upton was attending UNC-Greensboro in North Carolina. He mentioned to me that he thought the Asheville campus had an audio degree program. So I looked into it and before I was halfway through my second semester in Lowell I was setting up a transfer to UNC.

Asheville was perfect. I got a single room so I could focus on my studies. I got absolutely first rate guitar instruction from a young guy with tremendous skill named Chris Biesterfeldt. The weekend of orientation I saw him play at a festival in a fusion band composed of UNC faculty members called Inside Out. He knocked my socks off. He was like some insane combination of Mike Stern and Joe Satriani. And while I'm sure it wasn't his calling in life he sure could teach.

circa 1987 at Mason's BarnThe high quality of life in the area drew in tremendous talent to faculty at UNC-Asheville. We had this great percussionist Dr. Doug Ovens who taught Sight singing and put on the bizarre performances involving percussion compositions and modern dance. I was able to get cheap season tickets to the Asheville symphony while I took Music History classes from its conductor. The director of the department and instructor for audio engineering classes Dr. Wayne Kirby was Debra Harry's former bass player and producer. And to top it off I ended up taking Synthesis, Midi, Electronics classes from the recently departed Dr. Robert Moog.

There was never a shortage of great talent to learn from at this tiny little music department in the mountains. We got to experience performances and clinics from the likes of Victor Wooten, Gary Burton, Chick Corea, and the Kronos Quartet.

I stumbled on to a great internship where I recorded 60 classical performances at the Brevard Music Center under the tutelage of a very smart guy by the name of Dick Kowal from the local public radio station WCQS. He even played one of my recordings on the air.

circa 1994 with wife MarySo far as my non-academic playing was concerned I met up with a guy by the name of Joel Mahathy the first day or two I was on campus. One of us, or both of us perhaps, was wearing a Rush shirt which got things started. When I got to UNC my knowledge of what I thought of as progressive music was really limited to bands like Rush, Marillion, and Dream Theater. Joel had an extensive collection of tons of exciting music and was very much then and still continues to be today one of my what-to-listen-to mentors.

So with some help from Joel and another proggy student named Bob Lundin I dove into the worlds of early Genesis, Yes, King Crimson, Gentile Giant, Mike Oldfield, Frank Zappa, Dr. Nerve, Tangerine Dream, as well as lots of great jazz and modern classical music.

Over the 4 years Joel, Bob and myself ended up forming a couple of different progressive bands and were eventually joined by Doug Upton who transfered in from Greensboro. We played at the campus snack bar and a couple of clubs around town doing progressive rock covers with varying degrees of success. I do remember nice versions of Zappa's "Baby Snakes", Pink Floyd's "Sheep", Jethro Tull's "Locomotive Breath", Rush's "La Villa Strangiato" and Kansas's "Magnum Opus" while our attempts at a lot of other pieces fell a little short of the mark. Our claim to fame is we got to to open a club gig for a band that was on "Star search". ;)

circa 1997 working on 'Frames of Mind'And if all that good music and learnin' stuff weren't enough I met my future wife in my time at UNC too. When I got there she was a Junior year audio engineering student and flutist. One day Joel sat down at the cafe for dinner and said there was this girl in the practice room playing the melody to to Rush's "Jacobs Ladder" on flute. Intriguing! Sometime after that we met when she was walking in the Quad donning a Rush shirt (what is it with the Rush shirts as ice breakers??). A year or two later she became the audio engineer for our little group which was at that point called Anathema.

circa 1999After graduation in 1993 I moved back to New Hampshire with Mary and then didn't end up playing very much for a couple of years. I got itchy to start playing again in December of 1995 and posted an email to the now defunct "National Midnight Star" looking for other interested parties. The result of which was Electrum, the band of which I've been a member for about 10 years now. The detailed history of our band can be found here. Suffice to say for the purpose of this bio that Electrum was my first really serious effort at song writing. In addition it led me to discover I had an interest in computers so we could create a web site - which was sort of a big deal 10 years ago. Now computers drive my professional life as well as my home recording musical career (note: my professional life also finances my musical career). Plus I made a couple of great friends. So finding this creative outlet was a blessing for sure.

Then at some point I found I had some spare time to work on some music of my own... and I started recording it... and I made a website... and for this website I wrote a biography ... and thought I should begin it by saying "I was born on January 15th, 1970"...

Notes In The Margin