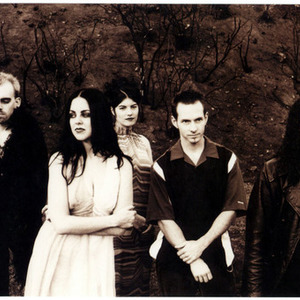 Darling Violetta is a dark pop band based in Hollywood, California. They released their first EP Bath-Water-Flowers in 1997, though this work is commonly considered an album by most sources. Two songs from Bath-Water-Flowers ("Cure" and "Blue Sun") were performed by the band in the episode "Faith, Hope & Trick" of the television series Buffy the Vampire Slayer. Next year, the band composed the popular theme for Angel, the spinoff series from Buffy.

In 2005, the band composed an extended version of the Angel theme called "The Sanctuary Extended Remix", featured on the soundtrack of the series Live Fast - Die Never.

The style of the band is recognizable for the voice of singer Cami Elen (compared by some critics to that of PJ Harvey), the use of cello and violin, specially in their early compositions, and lyrics charged with sexual innuendos, dark metaphors and goth references.

Darling Violetta have their own website at http://www.darlingvioletta.com and are currently working on their Fourth Album along with a DVD.

The Kill You E.P.