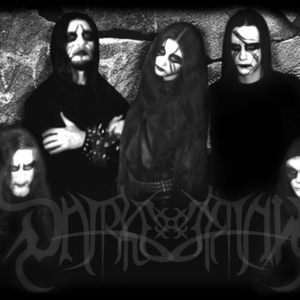 DARKESTRAH formed in mid 1999 by Asbath in Kyrgyzstan. The first demo, entitled ''Pagan Black Act'' was recorded in December 1999. In December 2000 the second demo ''Through the Ashes of the Shamanic Flames'' was recorded and released through german label Curse of KvN Sadistic in 2003. In February 2003 the debut album ''Sary Oy'' was recorded, which gained a wide response worldwide through NCR in 2004.

In February 2003 the debut album ''Sary Oy'' was recorded, which gained a wide response worldwide through NCR in 2004.

Great melodic parts were paired with traditional instruments like Kyl-kyjak, Komuz or Sygyt. Female Black Metal vocals and throat singing that created the athmosphere of the spiritual shamanic people. Sary Oy lyrically brings the ancient kyrgyz tales about three sisters of nature in three songs. This record marked Darkestrah's as one of the most interesting bands within the Shamanic Pagan Black Metal genre.

In January 2007 Darkestrah realeased new album "Epos". This time the band changed studio, and now this is the "Kick the Flame Studio'' (studio of the member from the band Disillusion). This album included one magic long Black Metal composition at the medium tempo with some acoustic tunes and the atmospheric feel. This ''Epos'' is completely dedicated to our beloved lake Issyk-Kul', which is located in Central Asia. There are more than ten legends, histories, myths, fairy tales about this lake. Every aspect of Epos signifies a spiritual, almost pre-historic journey. The album is thick with Pagan themes, but it is not done in a way which seems almost cliche in Black Metal these days. Darkestrah's approach to pagan expression this time has been one of using subtlety to convey power of expression.

In March 2007 Darkestrah have ended relationship with NCR.

In April 2007 the band signed to US label Paragon Records.

March 2008, DARKESTRAH has finished the recordings for the new studio album "The Great Silk Road" and the final work, was released in August 31, 2008 through Paragon Records. The CD comes with a Darkestrah logo metal embroided patch, and the entire packaging is wrapped in black silk and stamped in Wax. "The Great Silk Road" described as a spiritual, almost pre-historic journey, using pagan themes in a very unique way, often paying homage to the bands Shaman roots. Great melodic parts were paired with traditional instruments like Kyl-kyjak, Komuz or Sygyt. Female black metal vocals and singing that created the atmosphere of the spiritual shamanic people.