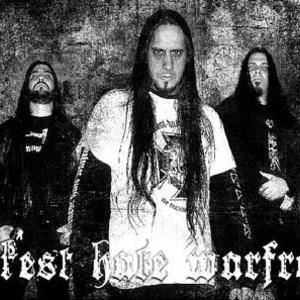 Darkest Hate Warfront was born in the year of 1999, formed by Marcelo HVC aka Mantus (also member of the bands Mysteriis - R.I.P. and Ancientblood) with the purpose of approaching themes as chaos, violence, war and hate in a music way, using an apparel that mixes 80 Thrash Metal with the fury and extremism of the current Black Metal. In the beginning of 2000, the band unleashed its first demo-tape, called "Total Destruction", through the Dutch label Black Abyss Productions.

In 2002, a second demo-tape was released, called "Unholy Devastation", through the label Christcrusher Productions (England). This same material was out in Brazil, plus the first demo as bonus, by SST Records. Both had a good repercussion in the metallic scene, mainly European, waking up the interest of the German label Ketzer Records to launch the debut full length-album work. Before the compositions began, Devasth (vocalist and member of the lusitanian band Lux Ferre) joined to DHW, collaborating for all creation and elaboration of the work that would come to be recorded.

The first album, "Satanik Annihilation Kommando", was released in the year of 2005 and is still yielding several positive critics in the world metal scenery. The CD received 8/10 in one of the biggest Metal magazines of the world, the German Rock Hard, in which was classified as the "Black Metal Album of the month". " S.A.K" also appears in several international compilations, as in American magazine Explicitly Intense, besides bands as Exodus, Hypocrisy, Nuclear Assault, among others.

In the period between 2004 and 2006 the band suffered many changes in its line-up, prevailing in the frontline: Mantus (drums), Alex Kaffer (guitar), Colt.45 (bass), Agares (vocal) and Troian (guitar). During that same period, was composed and recorded the second album, entitled "The Aftermath", that was mastered by the great German producer Andy Classen (Belphegor, Rotting Christ, Krisiun, and others) and released by Ketzer Records in October 2007.

The band already played besides bands like Matanza, Watain, Gorgoroth, Belphegor, Tortharry, among others. Currently Darkest Hate Warfront is promoting "The Aftermath" album, composing the MiniCD "Empire Rebirth", that will be released in the beginning of the next year, and preparing its first European Tour in May of 2008.