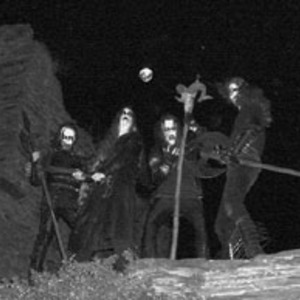 Darkened Nocturn Slaughtercult is a German underground black metal band from Dormagen, Germany, founded in 1997 by Onielar and Ariovist. Today the band is made up of Onielar (voc, git), Velnias (Git), Horrn (Drums), and is currently seeking a new bassist. They are a bit of a rarity in that they are a black metal band fronted by a woman. (Onielar's real name is Yvonne Wilczynski). DNS is playing a raw and fast version of old-school black metal, combined with Onielar's witchery voice, making the Sound of DNS idiosyncratic.

DNS is playing a raw and fast version of old-school black metal, combined with Onielar's witchery voice, making the Sound of DNS idiosyncratic. The lyrics expectorated by Onielar and Velnias are dealing with themes like satanism and nihilism. DNS is in dead earnest with their lyrics and opinions about life and society and is NOT practising show-satanism or poser-misanthropy.

This leads to the point that many people listing to mainstream (black) metal, still strongly linked with the mainstream society, are making fun of DNS.
In a row of this DNS is still a underground band, making true black metal, which soundes like Norway's black metal in the early 90s - the second wave of black metal.
DNS is deprecating all influences from other typs of metal, which infiltrated black metal in former times.

Cassete versions of all DNS albums have been released by Khlyst and Stabaath of Ukrainian black metal band Lucifugum on their own label Propaganda. A link to Lucifugum band (also female fronted): http://www.last.fm/music/Lucifugum


DNS is releasing all of their CDs by themselves:
1999 The Pest Called Humanity (EP)
2001 Follow the Calls for Battle
2004 Nocturnal March
2006 Hora Nocturna
2009 Saldorian Spell