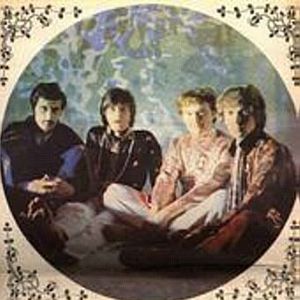 Dantalian's Chariot was a short-lived British psychedelic band in the same whimsical manner of groups like Pink Floyd and The Beatles. They also boasted the finest light-show in England at the time, which was quite a draw in 1967. The group were basically just Zoot Money's Big Roll Band (an above average R'n'B rave-up band) with a new name and a totally new direction. Zoot Money (vocals, keyboards), Andy Somers (guitar), Pat Donalson (bass) and Colin Allen (drums) exchanged their suits for white, flowing robes and quickly became UFO favourites.

?The Madman Running Through The Fields', their only single, has since become recognized as one of the best songs of the entire British psychedelic boom. Full of backward phasing, studio effects and abrupt changes into unexpected avenues, an original pressing is now a highly valuable collector's item. They soon started work on an LP but it was never finished as EMI didn't approve of Zoot's psychedelic conversion and promptly dropped them. They broke up in the spring of ?68 with Zoot and Somers joining Eric Burdon's New Animals and Allen joining John Mayall's Bluesbreakers.Their unfinished LP has since been released by Tenth Planet and is now available to all. Andy Somers would later gain fame as the guitarist for The Police.