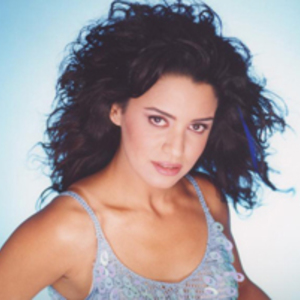 There are two artists with this name Dania Khatib (Arabic: ????? ??????), born February 13, 1973 , is an Arabic singer of Lebanese origin. Dania Khatib was born and brought up in Lebanon and in time honoured fashion, has loved music since she was a child. Her interest in singing was always apparent in early childhood when it was her hobby to sing in her room, recording and playing back her favourite songs.


Dania Khatib was born and brought up in Lebanon and in time honoured fashion, has loved music since she was a child. Her interest in singing was always apparent in early childhood when it was her hobby to sing in her room, recording and playing back her favourite songs.

She started off working as a TV presenter for one of the local stations in Lebanon and became well known locally - a totally different direction from that expected of her as a university graduate in Fine Arts. It was on one of these shows that her obvious talents were spotted by executives of the International Music Satellite channel ? Star TV?s Channel [V] broadcast throughout Asia and the Middle East. She joined Channel V in 1995 becoming the first ever-Arabic VJ on an international T.V. channel and becoming extremely popular with viewers throughout the Region.

At the beginning of 1998, she left Channel (V) to join Abu Dhabi TV where she presented the most successful Arabic entertainment program of its time - ?Zoom?. ?Zoom? captured the highest number of viewers of any arabic program during 1998 and consequently Dania was nominated to receive the silver award for ?Most Entertaining Arabic Program? at the Cairo TV & Radio Festival, 1998.

Following the success of ?Zoom?, Dania now presents ?Al Kafila? the renowned travel program for Abu Dhabi TV ? the first of its kind in the arab world which has seen her globe trot the world while maintaining her status as one of the Middle East?s most popular singers and all round celebrities.

While at Channel V, her singing career was launched when her debut single, ?Yalla Bina?, was released in October 1996. The song was a huge hit and was the lead track on the top selling compilation album, ?The Best Arabian Nights Party?. in the World Ever!. EMI Music Arabia released her self-titled debut album, ?Dania? featuring nine tracks in September 1997. The dance floor filler, ?Fiesta?, was the follow up single to ?Yalla Bina?, taken from the album and supported by an innovative and very popular video clip, it was another huge success all over the region and established her firmly as the bright young star on the Arabic Music scene.

Her debut album reached platinum status in less than 6 months, and she released the third and final single from the album, the ballad ?Mafeesh Tari?a? in late 1998.

Dania?s 2nd album entitled ?Dania II? was released in June 1999 and illustrated her ever improving vocal abilities and versatility. The album was a unique and eclectic blend of musical styles ? a melting pot of Arabic, English, Spanish and Greek influences ? which appealed to Arabs and non-Arabs alike and included the first single and video clip ?Leiley? remixed by the highly acclaimed Transglobal Underground, best known for their work with rock legends Jimmy Page and Robert Plant and one of the UK?s top remix outfits; ?Ya Dallah? a modern reworking of the old hit by the legendary singer Sabah, and a duet with the highly successful British boy band 911, on the UK number 2 hit ?Private Number?. Chico the front man of the world renowned Gypsy Kings, especially composed her a song ?Es Salam? for the album in his own unique style.

The oriental flavour of ?Leiley? appealed to all nationalities and appeared on a number of compilations worldwide including the 500,000 unit selling ?Arabian Nights? album in Brazil and has been in demand from a number of TV Companies including MTV, for soundtracks, etc.

During 2001 Dania has been recording her third album in Dubai and Beirut with the much in demand producer and arranger Jean-Marie Riashi. Again the 12 track album draws on a wide array of influences and includes a modern update on the classic folklore song ?El Helwa D? (the ?Cou Cou? song) which is destined to be a huge hit, along with the Mediterranean flavoured songs such as ?La Tehtar?, ?bhebba? and ?Ana Baddi?; ?Mishtaa La Oyounak? composed by Lebanese star Yuri Mrakadi and a sure fire dance floor smash duet with Argentinian stars La Mosca ?Para No Verte Ma?s?. The album is released in late March worldwide on both CD and MC formats on EMI Music Arabia.


Dania Morales of U.S. electronic/synthpop band Anything Box has recorded solo music under the name "Dania." Anything Box are best known for the 1990 hit single "Living In Oblivion." Her song "Your Love" appeared on the "Cat Compilation II" album. Dania still records and performs with them.