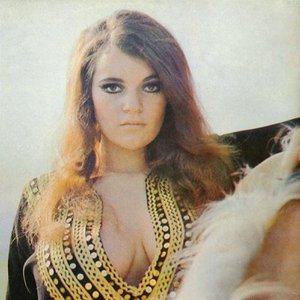 Dana Gillespie was a music lover from an early age: "I discovered the blues when I went to the American Folk Blues Festival in 1962 and also to see the Yardbirds at the Marquee Club. I was in my early teens and hadn't heard anything like it before." In 1964 she recorded her first single for Pye, with Donovan on guitar and became a regular on the folk circuit along with friends Donovan and David Bowie.

She recalls: "I was doing folk because I couldn't afford a band and I hadn't found my musical niche". In those early years Dana got to know many of the top bands and people in the music business, appearing on Ready Steady Go and other cool TV shows of the era along with the legends of the British pop explosion.

In 1967, she made this album, Foolish Seasons, a Psychpop/Swinging London/Folkrock masterpiece. Featuring the rare Donovan song, "You Just Gotta Know My Mind," which should have been a smash mod hit, (and also includes the guitar of JIMMY PAGE!!!), and two fantastic Billy Nicholls covers from his much celebrated and legendary Psych/Softpop gem, 'Would You Believe.' Arranged by the great Mike Vickers and produced by Wayne Bickerton (World of Oz, Jackie Lomax, Pete Best Four, The Rubettes), this is one of THE great missing links of 1960s pop....Dana was to make one more album for Decca, morphing seamlessly into a more blues based style, before becoming a star of London's West End theatre: the first run of Jesus Christ Superstar (playing Mary Magdalene), The Who's "Tommy" (playing the Acid Queen) and the rock Othello, "Catch My Soul". She also appeared with Peter Cook, Dudley Moore and Kenneth Willams in the film "The Hound Of The Baskervilles" and starred in Ken Russell's "Mahler". A number of roles in latter-day Hammer films and more experimental arthouse movies are also fondly remembered. As a singer she moved to RCA Records and made ?Weren't Born A Man' and ?Ain't Gonna Play No Second Fiddle', under the aegis of David Bowie, whose management, Mainman, also took care of her career. A period in the US was spectacularly ended when Bob Dylan invited her to appear on his 1997 UK tour.

I Rest My Case

Live With The London Blues Band

Back to the Blues

Have I Got Blues For You!