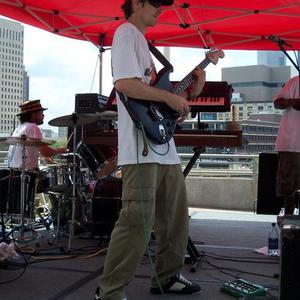 Mystic Mike and Jah Son I have been playing all types of music together for most of their lives. They started off playing in metal and punk garage bands while still in Jr. High and High School with their skateboarding friends. For the most part, these bands never made it out of the garage. Soon they were to discover, and be highly influenced by the militant beats and spiritual lyrics of Reggae. To them, reggae had that rebellious characteristic they had always cherished in the music they listened to. They began to collect as much reggae as they could and began to work the infectious rhythms into their songs.

In the mid 1990's, they were playing music that infused metal, blues, jazz, reggae, afro-cuban and funk into one unique concoction. They listened to so many different types of music and wanted to incorporate all of these sounds into the songs they were writing. A few years later, while living in Austin, TX, a spiritual reformation changed the two and they soon began to concentrate solely on reggae. The two brothers moved back to Houston, TX in the late 90's and formed the Cosmic Force Band with long time friend Dizzy Simmons. Soon they began to tour across the southern U.S. and Mexico. They shared the stage with international reggae stars such as the Wailers, Culture, Eek-A-Mouse, Wailing Souls, Capelton, Itals, Cocoa Tea, Steel Pulse, Burning Spear, Lee Perry, Mad Professor, Thomas Mapfumo, Everton Blender and the Abyssinians.

Until recently, Dub was something they had always dabbled in, but it played "second fiddle" to their roots-rock reggae projects. They made over a hundred LO-FI demos on their 4-Track Tape Recorder for fun over the years and soon decided to release an all dubwise album in 2002 entitled "Los Estados Unidos Take on the Freaks of Frankenstein at the World Cup" (which contained 16 improvised tracks recorded before, during halftime, and after the 2002 World Cup games they were watching on the local Spanish language channel). In 2005, Mystic Mike and Jah Son I finished the newest release "Sunny Days" which was mastered at the legendary Lion & Fox Studios. Unlike many of the contemporary dub producers, they do not use computers, sequencers, or "real" samplers. They record, play all of the instruments, and mix down the songs themselves in a very stripped down analog home studio. Dub lovers across the globe have already embraced their music. Pick up your fresh loaf of "Daily Bread" today!

DBDB: We both were born in Houston, TX into a strong Christian family.

DBDB: We both started off playing music pretty young. Our family had a piano in the house and we began to explore music when Jason was 6 and I was 9. Our mother played the piano, guitar, and sang and taught us the basics of music. About this same time, I started to play the viola in my grade school's orchestra. I have fond memories of several of the piano recitals my brother, sister, and I performed in. We decided to quit the piano after several years of formal music lessons due to a lack of interest in practicing scales and chords. Jason joined the grade school's band soon after, playing the snare drum and percussion. He played percussion (including the drum kit) all the way through until his freshman year in high school. Once he got to high school, they wouldn't let him play in the band unless he joined the marching band and dressed up in the uniform to perform at such prestigious events like school football and basketball games. Well, that outlook put an end to Jason's formal music training rather quickly. I picked up my Mom's old acoustic guitar, from when she was a teenager, when I was 13 and began to teach myself to play. Soon after, I got my first electric guitar and Jason got his first drum kit (complete with paper plates for cymbals... that was the way we rigged it up until he could scrape together enough money for the real deal). Jason and I started to put together punk and metal bands with our skateboarding friends shortly after, and have been playing all different types of musical projects together since.

GR: Tell me, how did your name come about? Any obstacles with it--funny mispronunciations, etc...?

DBDB: I was reading through my church's website one day, when I came across a lesson on the benefits of daily Bible reading /reasoning... specifically Matthew 4:4, "Man shall not live by bread alone, but by every word that proceedth out of the mouth of God." If we maintain our physical health by the daily intake of physical food, then shouldn't we do the same for our spiritual health by the daily intake of spiritual food?

DBDB: The Golden Rule; Treat others as you would want them to treat you. It goes a long way and it really works.

DBDB: Probably Bob Marley. We had the opportunity to open up for the Wailers Band two different times, but I would have loved to see Bob up front performing. In my opinion, he was the most mesmerizing front man in the history of music.

DBDB: That's a tough one. I guess I would say "Sucka Satan Dub" off the Sunny Days CD.

GR: Is there any song that you wrote in the past that you are embarrassed about? Anything that you wish you could make disappear?

DBDB: Most definitely. Everything pre-1993

DBDB: Wailing Souls "On the Rocks", Gentleman "Confidence", Dub Syndicate "Pounding System", Grant Green "Am I Blue?", and Yabby You "Dub To the Top".

DBDB: That's a really tough one for me. I have so many favorites. Since I have to narrow it down to one, I would probably say Isaiah 40:30,31 "... those who hope in the Lord will renew their strength. They will soar on wings like eagles; they will run and not grow weary, they will walk and not be faint." I get a burst of energy every time I think of this passage.

DBDB: The prodigal son. This parable shows how enormous the power of forgiveness is.

GR: Name one thing that fans do not know about you.

DBDB: We like watching NBA basketball...especially our boys the Houston Rockets.

GR: What has been your lowest moment so far in life?

DBDB: When I was a teenager and in my early 20's, I really went through a rough patch. I stopped attending worship and reading my Bible, and made some pretty poor choices

DBDB: Kevin Kinsella, formerly of John Brown's Body, once told me that the race is not won by the swift, but by those who endureth to the end. I was at a point in my career where I was very discouraged after a recent two month tour of Mexico where things didn't exactly go as planned. He helped me realize that patience and hard work pays off in the long run... Good things come to those who wait (and are prepared).

DBDB: We're currently recording brand new tracks for the upcoming release. We're changing the formula up a little bit, and plan to have several guest vocalists / instrumentalists on this one.

Ministry
Our mission is to glorify the Father, Son, and Holy Spirit in everything we do everyday in every way. Sharing our faith with others through music and awaking the "dead" to rise again.