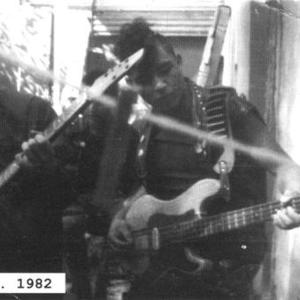 There are at least 4 bands named D.D.T. 1. DDT(or D.D.T.) was a hardcore punk band from atlanta, georgia that released their "brave new world" ep in 1983 with songs ranging from hardcore, to power pop, to thrash jams. 2. D.D.T. were one of the greatest bulgarian punk bands and also one of the earliest known. In the late '80s, they were the legendary punk band from Sofia. Great lyrics, really wise and punk styled. Lyrically they were sharp and brilliant, full of energy and witty rhymes.

1. DDT(or D.D.T.) was a hardcore punk band from atlanta, georgia that released their "brave new world" ep in 1983 with songs ranging from hardcore, to power pop, to thrash jams.

2. D.D.T. were one of the greatest bulgarian punk bands and also one of the earliest known. In the late '80s, they were the legendary punk band from Sofia. Great lyrics, really wise and punk styled. Lyrically they were sharp and brilliant, full of energy and witty rhymes. Some of the songs have topics like the nuclear arms race, the devaluation of the ideals, while others are just funny.

D.D.T. started in 1981 with Dani on bass, Bobi on guitar and vocals, and Adama on drums. Ivo replaced Adama in 1985 after they recorded the demo. The lineup once again changed in 1987, with Dani staying the only original member, and the addition of guitarists Toro and Kole, and drummer Filthy. Thomas joined on vocals in 1991.

Unfortunately, at their peak D.D.T. were not able to record properly in a studio, due to the communist regime that governed Bulgaria at the time. So, their first songs recorded sound as any of the "Bullshit Detector" type of bands that once CRASS released on compilation LPs. All their songs that were preserved through the years came out in 1999 on a CD (We Are DDT-Punk Will Never Die!-1981-1991), released by "AON" records with several other underground labels. The CD features 8 tracks recorded in 1985, 5 recorded in 1987, and 7 recorded in 1989-1990. Tracks by D.D.T. can also be found on the "Greetings from Bulgaria" compilation tape and the "Bulgarian Archives" compilation 7".


3. D.D.T. was a hardcore aggro-industrial electronic act that was together in Boston from the late 1980's until the mid 1990's. Noel McKenna did drum programming and vocals, Lisa Sirois did (8 bit!) samples and some vocals, and Elaine Walker (who joined in late 1991, also of Zia and Sleep Chamber) did synth programming. Note that every song is micro/macrotonal except Blessed. This adds a futuristic and other-worldly edge to the music. Elaine joined D.D.T. at the same time she was forming ZIA. The first ZIA lineup consisted of Noel McKenna and Lisa Sirois of D.D.T. Where are they now? Noel is now a Buddhist Monk in upstate New York and Lisa is "DJ Goldilox" in San Francisco.

During the long-running competition, the group published their first album (on tape), Svinya na raduge (A pig on a rainbow). The album contained elements of rock and roll, blues and country music. At this time Russian popular music was divided between sanctioned official performers, granted entrance to the musicians union and official patronage, and unofficial artists. Unofficial artists were often highly trained musicians but had other jobs. Complex tape trading networks evolved in the 1980s and unofficial artists music could receive wide distribution (without artists receiving royalties) in this manner [see also samizdat]. Such "underground" artists often became widely known and their unofficial albums were even sometimes mentioned or tracked in the press. DDT in the 1980s is the story of a band skirting between underground and sanctioned status, more unsanctioned.

DDT's submission to Zolotoy Kamerton passed through to the finals and the group was invited to perform in a concert at Moscow's Orlyonok complex, together with the other finalist band, Rok-sentyabr (Rock-September) from Cherepovets. DDT and three members of Rock-September, Vyacheslav Korbin, Yevgeny Belozyorov and Andrey Maslennikov, soon after recorded and published an album (on tape), Monolog v Saigone (Monologue in Saigon).

In May 1983, DDT successfully performed at the Luzhniki Stadium in Moscow, as part of a three-day, sanctioned festival, "Rok za mir" (Rock for peace). Their performance, however, was cut out of the television program about the event.

The new formation published the album Periferia (Periphery), recorded in April 1984. After recording the album, some members of the group began to be watched and contacted by the KGB.

In November 1985, DDT recorded the album Vremya (Time) in Sverdlovsk.

In 1986, Shevchuk moved to Leningrad (present Saint Petersburg) with his wife, son and mother.

In 1987 he rebuilt DDT. The members included:

In June 1987, DDT performed at a Saint Petersburg rock-club festival. DDT performed second-to-last and in front of a crowd of 3,000, even though the venue's capacity was 1,000.

In the summer of 1988, DDT toured across the USSR, and they record a new album, Ottepel (Thaw).

In 1989, DDT went on another tour with the group Alisa, performing also at a rock-festival in Hungary.

In 1990, DDT performed several concerts in the U.S. and Japan. They also performed as part of a concert in honor of Viktor Tsoy.

In 1991, DDT released another album, Plastun (Scout). The next album followed in the spring of the same year, Aktrisa Vesna (Actress Spring).

On 27 May 1993, the anniversary of Saint Petersburg, DDT performed a free concert on Dvortsovaya Square. 120,000 people attended.

During the summer of 1994, DDT took part in the rock festival White Nights of Saint Petersburg in Berlin. That autumn, the group was awarded the prestigious Ovatsiya award (Ovation) for Best Rock Group of the Year. Yuri Shevchuk was also named Best Rock Musician of the Year.

In the beginning of 1995, a new album, Eto vsyo? (That's all?). was recorded. In January, Shevchuk went on a mission of peace to Chechnya, where he performed in 50 concerts for the Russian troops and Chechen citizens alike.

On 25 June 1995, DDT performed a solo concert in Petrovsky stadium, which attracted tens of thousands of fans.

Afterwards, the group toured with its next programme, Ot i do (From and To). In the end of the winter of 1995?1996, the group worked in the USA. In February?March 1996, the group recorded a new album, Lubov (Love), at Long View Farm in Massachusetts with new musicians: bassist I. Tikhomirov (from the group Kino) and keyboard player D. Galitsky.

In the summer of 1996, upon their return from the United States, the group headlined several festivals, including VladiROCKstok, the first large-scale international music festival in the formerly closed city of Vladivostok on the Sea of Japan.

Yuri Shevchuk and the Russian rock group "DDT" have been leaders in the Russian rock movement for many years. Shevchuk began to put together the first incarnation of the band in the summer of 1980, and although its members have changed over the years, Shevchuk continues to voice the concerns and frustrations of the Russian people in his music today just as he did in the band's infancy. The more than 20 albums in DDT's discography not only chronicle the history of a rock group; they are narratives that examine all aspects of life in the Soviet Union and Russia over the past 25 years.

DDT was organized and gave its first concerts in Shevchuk's native city of Ufa in the Ural Mountains in 1980. They received their first public recognition when they were given the "Golden Pitchpipe" prize for their song "Ne Strelyai" (Don't Shoot) in 1982 by a local newspaper. Unfortunately, this also brought them to the attention of the Soviet authorities and KGB, and their music was banned, forcing them to go underground. In some ways this made them even more popular among young Soviets; in 1983 they played at the "Rock of the World" music festival at the huge "Luzhniki" stadium in Moscow, only to be edited out of the television broadcast because of their "illegal" status.

Although they never considered themselves political activists, Shevchuk always felt it his duty as a citizen and a songwriter to address not only the strengths but the weaknesses of his country's government, a stance none too popular in the U.S.S.R. Over the next ten years DDT continued to work as a "non-conformist" group, producing albums and giving concerts throughout the Soviet Union. This was no easy feat, as they received little if any money for the records they produced during this period, and very little for their concerts as well. Like other dissident artists, they survived through a combination of cleverness, perseverance, and wit. Their relocation to the city of Leningrad (St. Petersburg) in 1985 also helped them to establish themselves at the forefront of the Russian rock scene. They made their first visit to the U.S. in 1988, when their concert in Los Angeles was covered by MTV. After the U.S.S.R.'s collapse in 1991, DDT became even more popular at home and abroad, as their albums and concerts began to be broadcast and publicized widely.

Today, DDT is one of the most popular (if not the most popular) rock groups in Russia, and their concerts attract tens of thousands of people. Shevchuk and his group also regularly travel throughout the C.I.S. and other former Soviet republics to give benefit concerts: in the spring and summer of 2002, 10 out of 11 concerts that the band played were benefits for various social and cultural organizations. They are also reaching an ever-growing audience in the U.S. and Europe, and for the past 15 years have traveled frequently throughout the world making ever more converts to their unique sound. Shevchuk's music and lyrics are not only influenced by traditional "western" rock music, but also by the entire scope of Russian folk, classical, and religious music. In many respects their years as an underground group shaped their philosophy towards their art. The question of their music's marketability was never part of the song writing process for there was no "market" in which to compete. This, their extraordinary talent, and their adherence to their cultural roots have made them a rare commodity in today's popular music scene. Today they continue to maintain their musical integrity in the face of ever-growing pressure to conform to the pop music that pervades the Russian airwaves. They are currently celebrating their 25th anniversary with an extended tour throughout their native country, Europe, and North America, and have released a new CD entitled "Vanished Without a Trace" to huge critical acclaim.

On March 3 2008, DDT performed at the Dissenters' March in St. Petersburg to protest the controvertial and possibly unfair election of Dmitriy Medvedev as President of Russia.