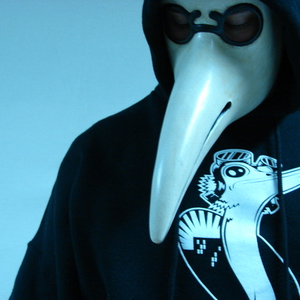 In 1995, at the tender age of fifteen, Derek Christoff was already building a name for himself as D-Sisive at Toronto's Planet Mars open mic nights while further decimating the competition on the Eat the Beat freestyle battle segment of Mastermind's infamous radio show at CKLN 88.1 fm. His studies continued under the tutelage of Planet Pea and the rest of the Cryptic Souls Crew, sitting in ? and soon participating ? in recording sessions with the likes of Double Soul, DJ Serious and Abdominal. Three yeas later and D-Sisive was ready to release his debut EP, J.

.C., a touching collection of songs dedicated to his dearly departed mother, featuring his now classic ?Just A Child.? Enter D-Sisive as the introspective emcee. J.A.C. led to collaborations with DJ Mastermind, hip-poppers Len, Abs & Fase, Classified and DJ Serious, with D-Sisive dominating as class clown, emphasizing humourous punchlines and comedic performance art stage shows labeled D-Siggy's Playhouse. When ?Popped,? a condemnation of pop music from DJ Serious's Dim Sum compilation in 2000, resulted rather ironically in worldwide attention for D-Sisive, interest from the major labels followed. ?Big headed like Christina Ricci,? as he explains it, D-Sisive wasted the opportunity presented to him, and instead regrouped and reevaluated what he wanted, returning refreshed and renewed in 2005 with two singles on DJ Format's If You Can't Join 'Em, Beat 'Em, which debuted at #1 on the UK Independent Music charts. A European tour followed.

D-Sisive capitalized on the new exposure by releasing Yesterday: The Mixtape, a collection of early recordings and rare, unreleased material from 1995 to 2004. He also joined forces with Stu Stone and Jamie Kennedy to co-write and produce ?Rolling With Saget,? a video featuring Bob Saget, John Stamos and George Lucas that became an instant Internet sensation and was featured on the MTV series Blowin' Up. While up to this point in his career D-Sisive's most noticeable influences have been hip hop artists like Cypress Hill, Funkdoobiest, Wu-Tang Clan and A Tribe Called Quest, his return to releasing solo music in 2008 has so far displayed his greater range of non-hip hop influences. The Idiot: Hijacked, an EP of songs with D-Sisive rapping over music from Iggy Pop's The Idiot, was made available as a free download and received some critical acclaim thanks to the song ?Nightclubbing,? the video also hijacking footage from popular Canadian export Degrassi High. He followed that with a mini-album on Urbnet, The Book, short for The Ballad Of Orville Knoblich, named after his ostrich mascot that also serves as his production alter ego. Here he exposed his Beach Boys influence with ?Brian Wilson,? a song about D-Sisive's struggles with fame, as well as his interest in Tom Waits, who sanctioned the use of his voice and music for ?Ambulance,? and Daniel Johnston, who he covers on album opener ?Intro (The Portrait of an Artist).? Marking a return to his more serious, introspective self, D-Sisive still peppers the songs with witty punchlines and a comedic attack with ?ThisIsWhatItSoundsLikeWhenWhiteBoysListenToHipHop.? The Book also spawned a number of creative, low budget videos revealing a fascination with puppetry. In 2009, he finally released his debut album, Let the Children Die, to much acclaim.

After devoting nearly half his life to hip hop, Derek Christoff finds himself coming pretty much full circle; from an introspective young emcee to class clown and back to introspective again, D-Sisive has evolved into a mature writer of emotionally poignant music that displays a much more refined sense of humor.

Nobody With A Notepad (Plus Three) (EP)