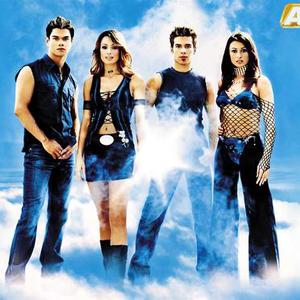 A Touch of Class was a pop group based in Germany, although the four members each came from different countries?Joseph "Joey" Murray from New Zealand, Sarah Egglestone from Australia, Tracey Elizabeth Packham from England, and Livio Salvi from Italy. The four met in Hamburg, where they were all cast members of the German production of the stage musical "Cats". Their first single, "Around the World (La la la la La)" (which was a cover of the song "Pesenka" of the Russian group Ruki Vverh) was number one in Germany for six weeks in 2000.

Their first single, "Around the World (La la la la La)" (which was a cover of the song "Pesenka" of the Russian group Ruki Vverh) was number one in Germany for six weeks in 2000. It was later on a Top 40 hit in the United States and United Kingdom. The song was in television commercial for General Electric in the United States. It has since been covered by DJ Carlee and re-titled "Dizzie Round The World" in the Hardcore techno genre[1]. The song was also covered in 2007 by the band BeFour under the name "Magic Melody."

Their debut album Planet Pop featuring songs from Alex Christensen and Clyde Ward was released on February 6, 2001, by Sony BMG Music Entertainment, for which they were awarded an ECHO for 'Best Dance Act'. Similar sounding follow-up singles were successful in parts of Europe, but A Touch of Class are mainly remembered for their first hit.

They originally were promoted as "ATC" but the DJ and producer ATB successfully took the band's record label to court, and they were forced to change their name to A Touch Of Class. Three singles were released from their second album Touch The Sky in 2003 but they were not particularly successful, and the group decided to go their separate ways.