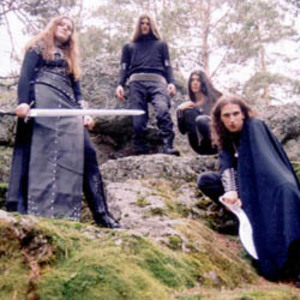 CYHIRIAETH is a Pagan Metal band from Spain created in June 2000 by Jarleth and Antubel, with the intention of making known and defend by their music and lyrics the original culture of Iberia, which existed before the arrival of the Romans and Christians and in this last years is being resurrected by the conscious bands involved in the Spanish black metal underground. In September 2000 they released their first demo, called "Following the Wind's Path", which got very good reviews from the Spanish scene, although presenting a primitive music, recorded quickly and with lots of failures.

In September 2000 they released their first demo, called "Following the Wind's Path", which got very good reviews from the Spanish scene, although presenting a primitive music, recorded quickly and with lots of failures. In this demo appeared three songs and an intro, and speaks about a warrior who after a bloody battle receives a vision that induces him to leave his town and find his own truth; years after he returns with the wisdom that makes him worthy of his kind. This demo was recorded by Elathan (Guitars), Antubel (Guitars), Aymar (bass) and Jarleth (vocals).

A good use of the experience obtained during the recording of the first demo was make for the second demo, "Into the Nemeton", released in August 2001, which consist of two new songs with a completely different sound, and with the participation of the new flutist, who gave to the music a new and mystic dimension. This second demo was recorded by Niko ( guitars), Antubel (guitars and bass), Cedrik (drums), Dagda (flute) and Jarleth (vocals).

On July 2003 Cyhiriaeth was ready to record, and decided to record some songs as a promo for labels. This way appeared "Iberian Heathen Chants", 5 songs which show the new direction of the band; this means more fast and with more traditional elements.

After one year of hard work, Cyhiriaeth entered studio on September 2004 to record 10 new songs, following the line of their last release. This way ?Lands of Ancient Cult? saw the light. The new songs have some more folk elements, but a lot of furious Black Metal too. A perfect mix of Iberian traditional music and Black Metal.

The present line up is:

CYHIRIAETH completely supports the revival of the Pagan Europe, our Pagan Believes and our ancestral traditions.