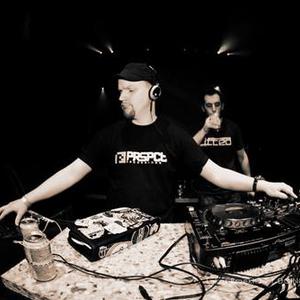 Shortly thereafter, he also began playing live in his hometown and subsequently in other places in Europe and in the USA. The early Position Chrome releases like 'Creative Robot', 'Skybreaker', and 'Bass Riot' were very well received, particularly in North America. The decidedly dark and often dissonant sound of the techstep revolution resonated with many disenfranchised junglists as well as electronica listeners; spearheaded in part by Current Value. With numerous singles and 4 LP's, Current Value left an indelible impression on the drum & bass and techno genres. With subsequent appearances on renowned labels like DonQ Records (Ger), Ruff-Teck (NL), Klangkrieg (Ger), Phantom Noise (Ger), NoBreaks (Ger), and Soothsayer Recordings, Current Value has continued to produce quality drum & bass for the dancefloor as well as the living room audience. In 2004, after 1 year of education, he received his Diploma at the School of Audio Engineering SAE - enhancing his production values and abilities even further. In mid 2005 Soothsayer released the first of several Current Value 12"s. Successive releases including a split 12" w/ Kid Kryptic (Soothsayer/Theoretic), and the monumental "The Unspoken" EP underscore the growing quality and number of Current Value releases. In 2006, Current Value will deliver bigger and better tunes with his new work for Soothsayer Recordings, Intransigent Recordings, the ultimate UK labels Obscene Recordings and Tech Itch, Counterstrikes label Algorythm and the amazing US based Evol Intent Recordings. Current Value has also begun collaboration with SPL (Tech Itch, Freak) and will provide tunes for his label "Lost Soul Recordings". In addition to releasing tracks on a barrage of the finest drum n' bass labels, he will concentrate on his live performance, providing a vocal live set with his singer SNOW and bringing his hard beats and bass to the shores of North America.