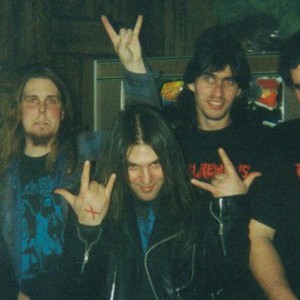 There are a few bands with this name: The american one: CRUCIFIER was founded under True Black inspiration on the ninth of September 1990 by drummer/vocalist/lyricist Cazz Grant "The Black Lourde of Crucifixion." The initial ensemble was Ira Redden (guitar), Jeff Anderson (guitar) and as aforementioned, Cazz Grant. After four months, five original titles and personal conflict, Jeff left the band.

The american one: CRUCIFIER was founded under True Black inspiration on the ninth of September 1990 by drummer/vocalist/lyricist Cazz Grant "The Black Lourde of Crucifixion." The initial ensemble was Ira Redden (guitar), Jeff Anderson (guitar) and as aforementioned, Cazz Grant. After four months, five original titles and personal conflict, Jeff left the band. These particular titles were perhaps, a bit "experimental" in their subject matter and orchestrated style. Although there were no official recordings of those songs, an unofficial rehearsal entitled "The Unholy Trinity" was planned, attempted and unfortunately aborted. In January of 1991 Jeff was replaced by the unique musical character of Dan Kamp (guitar) and Chris Miller (bass guitar). During the arrangement of brand new material, Ira left the group. His departure prompted an audition for guitarist Mike Machette. With this line-up Crucifier recorded its debut demonstration effort, "Humans Are Such Easy Prey." Surprisingly, this certain demo created an upheaval of praise in the Underground! In November of 1991, due to musical differences, Chris and Mike left the band. Fortuitously, though, a friend (and fan) of Crucifier was willing and able to play bass guitar; leading to an ultimate decision of remaining a three-piece unit. The second demonstration effort, "Crown of Thorns," was however recorded and produced without the assistance of new bassist Dan Keaton. The total knowledgeable Underground reaction to "Crown of Thorns" has been overwhelming! In September of 1992 Dan Keaton was dismissed. Shortly before his departure, material was recorded for CRUCIFIER's first official EP release: "Unparalleled Majesty" (a Pagan Records production). His dismissal resulted in the hiring of bass guitarist Gary Gandy. In the winter of 1992 CRUCIFIER recorded two songs for yet another Pagan Records (Poland) release. The second cassette EP, "By Disgrace of God" was a worldwide success! Sadly though, that accomplishment was not enough incentive to keep Dan Kamp with CRUCIFIER. Dan left to pursue a short career with close friends, the mighty Incantation! Resulting in a virtual mess in the CRUCIFIER camp! *After the release of "By Disgrace of God" the band went through a plethora of personnel. Utilizing the talents of such good friends such as: Joe Ceresini, Mike Pandorf (Snag), Joel Prange (Witchery), Craig Ross (Rapid Violence), and Chris DePetro (ex-Face First). And although not all past members of CRUCIFIER were mentioned, their help was, and in some case is, very much appreciated! Thank you all! Spring 1994 beckoned CRUCIFIER to search for instrumentalists overseas. In March British bass guitarist Mark Neto (ex-Cruentus) took flight to aid in the recovery. Although only a two man force, CRUCIFIER managed to compose a brilliant piece of art that offered a ray of hope in a very downtrodden year! One show was performed in the U.S. bringing back to the line-up, temporarily, Dan Kamp and Chris DePetro. A three song promotional work entitled "Powerless Against" was recorded in May with the assistance of Nick "The Marauder" Mertaugh (guitar). A side note: backing vocals were provided by Vlad Luciferian (ex-Grand Belial's Key/ex-Ancient/ex-Thokk) and Jose Infernal (Sargatanas Zine). Finally released through Virginia's Sinistrari Records (R.I.P.), "Powerless Against" added to the arsenal of True Black/Death Metal that encompasses CRUCIFIER's very essence! At the end of Mark's three month stay, he left, never to be heard from again... Going into hiding, Cazz Grant "The Black Lourde of Crucifixion" took to The Crucifier Studio to compose new material. In the interim, he helped many other bands in The Crucifier Brotherhood, International. In 1999, CRUCIFIER returned with a devastating release on vinyl with legendary maniacs Nunslaughter! The release titled, "Trafficking With the Devil" is a remarkable split seven-inch EP featuring the song "Foul Deeds Will Rise." Gaining hardcore momentum, CRUCIFIER hired Vince Papi (Hearse/Bludgeon) on bass guitar, Shane Losh (ex-Haunted) on guitar and Spencer "Madman" Murphy (ex-Goreaphobia/ex-Face First/ex-Polterchrist/Sacrificial Blood/Metal War Productions) on lead guitar. Shane left the area circa 2001 to work for B.C. Rich Guitars in California, but returned and is still close friends with the hordes; yet Shane is no longer in the band. Also in 2001, after a few live performances Shane, Vince and Spencer left the band. However, after a few months of soul-searching Cazz sought out Vince and Spencer again to keep the full line-up status of the band

Greek CRUCIFIER: ...was formed in February of 1995 by Hlias "Thanatoid" Kyriazis (vocals) and Giorgos Kyriazis (bass guitar) in Athens, Greece. With 3 demos (1995-Infernal Pain / 1996-Totally Madness / 1998-Fear is your Mind) 2 Ep's (2001-Innocent World / 2004-Escape or Die!) and a full length album (2002-Merciless Conviction) after several changes in the line-up, the band recorded the second full length (2006-Cursed Cross) with new members from 2003-'04 and '05 except Thanatoid. Crucifier have played in many live gigs until now and as a support they have played with Paul Di'Anno in 2003 and with Tankard once in 2004 in Athens and again in Larissa in 2006. Currently the band has changed once again his line-up with a new drummer, bass player and continue with one guitar.Unfortunately for personal reasons NICK,VAGGELIS and NICK(Drums) have left up and the new line up is ZISSIS(BENEFACTOR DECEASE)-RHYTHM GUITARZ//APOLLO(BENEFACTOR DECEASE)-LEAD GUITARZ//ANDREW(BENEFACTOR DECEASE)-DRUMS + PERCUSSIONS//GEORGE (EX-OCB) -BASS.For personal reasons and in fact there's not enought time, Andrew and George has left the band.After thrash searching the FINALLY LINE UP (official) is: ILIAS "THANATOID" KYRIAZIS - NASTY VOCALS///ZISSIS " CORONER" (BENEFACTOR DECEASE) - RHYTHM GUITARZ///APOLLO "THE DISMORPHED" (BENEFACTOR DECEASE) - LEAD GUITARZ///SAKIS "MAD BUTCHER" - BASS + BACK UP///ANASTASIS " DESECRATOR" - DRUMS + PERCUSSIONS. If You liked cursed cross LP beware our new BESTIAL THRASH ATTACK