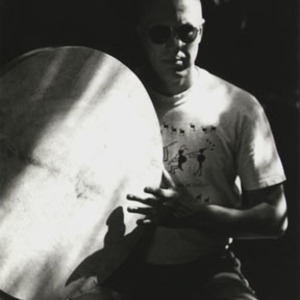 A Produce was an American recording artist and independent label owner who recorded trance and ambient works. He died in September 2011. A Produce has been exploring the vast realm of trance-oriented musical expression for several years in rock formats and other styles. In the early 80's, he established Trance Port for a series of cassette-only releases, to document the growing local trance music scene.

A Produce has been exploring the vast realm of trance-oriented musical expression for several years in rock formats and other styles. In the early 80's, he established Trance Port for a series of cassette-only releases, to document the growing local trance music scene.

Of the nine releases, three were compilations of local musicians/artists working within the realm of modern day trance music. Now out of print, the L.A. Mantra series of tapes documented the early 80's trance scene in Los Angeles.

In 1988, A Produce's interest expanded to modern day synthesizers as they offered a richer palette of sounds, and his first solo album, The Clearing, was released. Self-described as "an album of conceptual space", it featured contributions from several former Trance Port artists.

In 1992 he followed with Reflect Like a Mirror, Respond Like an Echo which, like The Clearing, almost defied categorization, neither falling neatly into the New Age category, or into the realm of "space music." Rather, both works blended the complementary aspects of several realms of modern day trance music -- ethno-ambient, electronic, New Age and space music, the idea vehicle for relaxation, contemplation, even movement.

In 1994, an extended 3-track EP entitled A Smooth Surface was released with the intention of exploring the realm of more meditative trance musics, taking the ideas first presented on The Clearing and Reflect Like a Mirror to an even deeper level.

The fifth A Produce release, White Sands, was a retrospective of his musical career in modern trance music so far, an anthology of pieces from 1988-1994 from his four previous albums, as well as a collection of hard-to-find tracks, alternate mixes, and unreleased pieces.

Taking its title (and front cover image) from the National Monument in New Mexico, White Sands reflects the serenity of a peaceful, even meditative place. Indeed, one of the tracks most often played (on radio), "Heart of the Dunes", takes its title from a brochure given to visitors to the monument. Even listeners who have closely followed previous A Produce releases will fine new material on White Sands.

Through the second half of the 90s, the latest A Produce album of new material was Inscape and Landscape, named after the 1975 book by Pierre Dansareau, a now out-of-print meditation on the human spirit blending with what at the time was a rapidly rising movement in consciousness about the ecology of the planet. On this album, A Produce explores a musical interpretation of these ideas. "I wanted to contrast these two very different, yet similar, environments along the lines of inner and outer space of the individual," he says. The pieces can be broken down into two categories -- inscape and landscape -- though some can be heard as a blending of both ideas.

The last A Produce release of the Nineties was 1997's "special edition" reissue of Reflect Like a Mirror, Respond Like an Echo. The special edition was remastered with the assistance of Robert Rich, and includes 3 bonus tracks: the previously-unreleased tracks "the marble staircase" and "sunstream", plus the extended version of "a smooth surface" from the out-of-print EP of the same name.

Most recently, A Produce has been working on a collaboration with Hypnos Recordings artist/founder, M. Griffin. Their project Altara was released on the Hypnos label in October 1999.

The latest news from A Produce is that his long-in-the-works solo album Smile on the Void is at last finished, and was released on Hypnos/Trance Port in March 2001.

Land Of A Thousand Trances

Smile On The Void