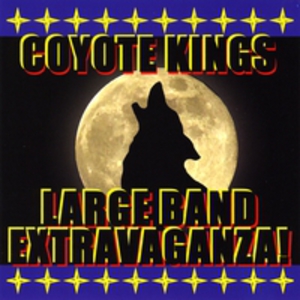 Following the 2008 release of their Empire Award nominated CD "Feelin' Lucky," the 'Kings' have enjoyed a rapid rise in the Northwest and world-wide. They are now one of the most sought after event, festival, and just plain PARTY bands in the PNW! With the Summer 2009 release of their second CD, "Coyote Kings' Large Band Extravaganza," featuring 12 live and studio recorded original tracks, Coyote Kings are ready to get out and rock up the Blues for you. Their live show is one big high powered stunner!

With over 100 years combined experience recording and performing for regional, national and international audiences, Robin "Barefoot" Barrett, Curtis ?Rocket? Johnson,? and ?Mondo Mike? Cook and Tim "Bass Monkey" Dallas make up the core of the band. Each is a respected artist in his own right.


The Coyote Kings' CD ?Feelin' Lucky? is out now on TwinLion/Hot Poop. It features 12 original powerhouse tracks, showcasing the collective talents of the band. CK are fast becoming regarded as a hot ticket... the new premier purveyors of ?The Northwest Sound.?

Coyote Kings are ready for you. Are you ready for the time of your life?

Robin Barrett has been singing, playing guitar & writing for over 35 years. He was lead singer, rhythm Guitarist, & principal writer for Tukanon Band, earning critical acclaim & a loyal following. Since 1991, Rob has turned his musical energy towards Bluesrock guitar & writing, playing, & singing some incredible music. While with ?The Robin Barrett Band' he played every top club in the Northwest and released the 1993 CD ?Love For The Blues.' Robin also released the 1997 solo CD ?Eclectricity.'

In 2002, after 25 years of writing recording and playing out, Robin hit large via the Internet. His song ?Naughty Little Girl' hit #1 on the MP3.com Blues & Bluesrock charts and stayed there for a full year! Robin's 2003 solo CD ?Blue Movie' continues to sell Worldwide.

With Robin, Curtis, and Mike, The Coyote Kings have hit the magic line-up. Robin says, ?I'm proud to be a member of the ?Yoties' and excited to hear my songs done so right. Every time we play I'm amazed at the heat!?

?Listening to Robin's music is an experience! Barrett brings an age old style right up to the twenty-first century with bravado and skill.? Chris K. - Godsofmusic.com

"Robin Barrett kicks himself into blues overdrive. It just can't get much better than this."
Music Reviewz.com

"This is the biz - sneering guitars ? ?make the bad-boy squeal' harmonics - crashing, no messin' groove - subliminal, sinister vocals - Barrett made the hairs stand up on the back of my neck and that's the truth!" Roj Agogo

"Robin Barrett is a guitarist who cooks his way through each song, definitely an experience!"
Cascade Blues Association - Blues Notes

"Whether he's going upbeat and cheery, or slow and dreary, Barrett is a master of mood."
Washington Blues Society - Blues Letter

Curtis ?Rocket? Johnson is a veteran Blues, R&B and Rock drummer who has provided tasteful, driving grooves for some of the greatest artists of our time. This native Texan toured and performed nationally and internationally with Alligator recording artist and multiple W.C Handy award-winner, W. C. Clark, and Texas guitar legend Alan Haynes, as well as appearing several times with both artists on television. He was also a member of the Austin based Matt Powell Band, while Powell (a young Rock and Blues guitar hero) packed Texas clubs and concert venues. With Curtis driving the beat, ?The Godfather of Texas Blues,? W.C. Clark won the prestigious Austin Music Awards for ?Best Blues Band.?

Curtis is also a revered member of the Northwest music scene and is regarded as ?Blues Royalty? by such notables as Jim Mesi and the late great Paul DeLay. As the original drummer with Jimmy Lloyd Rea and the Switchmasters, the Cascade Blues Association nominated Curtis for ?Best Drummer.? This was the year that the Switchmasters won ?Album of the Year? and ?Best Live Blues Performance? with Chicago legend, Snooky Pryor.

Currently Curtis is heating things up with The Coyote Kings, appearing live and on the new album. With the Coyote Kings, he is more than ?just a drummer.? Curtis is an integral part of the CK sound, adding his soulful vocals and incredible beats and arrangements. Curtis says, ?I'm proud to be associated with Robin Barrett and Mike Cook, and to add The Coyote Kings to the prestigious list of artists I've performed with.? These artists include? Albert Collins, B.B. King, Buddy Guy, Robert Cray, James Cotton, Sam Meyers, Snooky Pryor, Guitar Shorty, Jimmie Vaughan, The Fabulous Thunderbirds, Robert Jr. Lockwood, Charlie Musselwhite, Angela Strehli, LouAnn Barton, Paul DeLay, Jim Mesi, Too Slim & The Taildraggers, and many more?

?Mondo Mike? Cook has been wowing northwest audiences with his guitar pyrotechnics for over 30 years.

Mike was the lead guitarist and along with Robin, a founding member of Tukanon Band, who achieved an almost cult-like live performance following. Mike was featured on Tukanon's self-titled album along with the single ?Hold On,' which received national airplay.

In the 80s Mike teamed up with Keith ?The Wolfman? Wolford in the regional powerhouse ?The Fabulous Cyclones.' The Cyclones were a staple in the Central Washington and Puget Sound event and club circuit. Mike has played every club on Seattle's Pioneer square along with just about every ?A? room in the Northwest.

Upon returning to Walla Walla in the early 90s Mike lent his "mondo" guitar sound to perennial Northwest favorites ?Iguana Hat,' lighting up two CDs and playing events and festivals all over the PNW. Since leaving Iguana Hat, Mike has played with Robin in Lucky Dogs and in a reunion of the original four members of Tukanon Band.

Now Mike adds his scorching guitar, growling vocals and dynamic stage presence to the magic Curtis ?Rocket? Johnson beat and the strong Robin Barrett songs of Coyote Kings. Mike is the true classic rocker of the Kings and puts on a great stage show. You haven't seen anything until you see Mike wind up his Tele and play with a beer bottle, a pocket knife, a mic stand, or even his shoe!

The Coyote Kings newest member is bass-master Tim "Bass Monkey" Dallas. Tim's no nonsense thunder bump provides "the grease behind the groove" that gets people out of their seats and keeps them moving.

Tim is a veteran Blues, Rock, and Country bassist who has layed down the groove in the Northwest for audiences for the past 25 years. He's worked with Bryan Shaddix of The Tickets, High Country, Ratskellers, The Shades, and Brick, before joining Coyote Kings in 2008. Tim has also shared the stage with Phil Bennett of ?Starship?, Randy Oxford, and The Classic Rock All-Stars.

Tim adds his solid, thundering, "meat behind the beat," bass to the Coyote Kings in the studio and on the stage, and the Kings are proud to welcome him to the pack!