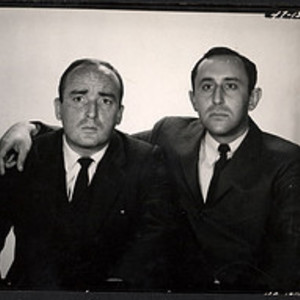 Blue, Check This Out, Rousse, Rx, The Vitamin B12, Tsf

Jim Coyle and Mal Sharpe were the early masters of street pranks and puts-ons, baffling unsuspecting citizenry with their "terrorizations". Coyle and Sharpe were professional imposters who defined what is now commonplace on radio and TV with shows lke Da Ali G. Show, Cash Cab, Howard Stern, Candid Camera and more. Using hidden microphones, they clandestinely recorded their bizarre encounters with unsuspecting citizenry on the streets of San Francisco in the 1960's.

Their gags weren't for everyone, and reportedly they were thrown out of Fantasy Records with honcho Max Weiss heaving their precious demo tapes down a flight of stairs screaming:
"Get out of here, you Communists!" In 1964, they were hired by KGO in San Francisco to do a nightly radio show called ?Coyle and Sharpe On The Loose.? Most of the audio heard by them was recorded during this period when they also put out two albums for Warner Bros., The Absurd Impostors and The Insane Minds of Coyle and Sharpe. The duo eventually split up, with only Sharpe remaining in show business, and this reality became permanent with Coyle's death in 1993 in a Barcelona construction accident.

In the mid 1990's punk impresario Henry Rollins helped revitalize public awareness of these infamous audio pranksters by reissuing several of their old bits on the Infinite Zero label he ran in conjunction with Rick Rubin.

Mal Sharpe went on to host his own television programs, and continues to do commercials and voice-overs. A master trombonist, he leads his Dixieland jazz band, The Big Money In Jazz Band. For almost 20 years, he has hosted a Sunday night show ?Back On Basin Street? on KCSM/Jazz 91 in the Bay Area.

These 2 Men Are Impostors-Box Set