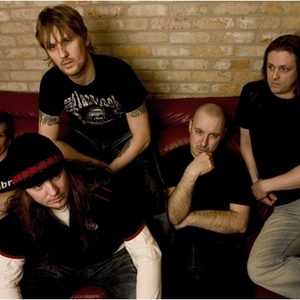 Fans of heavy rock probably are already familiar with Belgian bands such as Millionaire, Arid, Triggerfinger and Channel Zero, and they will certainly love Cowboys & Aliens, hailing from the beautiful medieval city of Bruges. C&A was formed back in 1996 by John Pollentier (guitar), whose actual purpose was to create alternative music. That path drastically changed when Kris Vandekerckhove joined on bass.

Inspiration was taken from the ultra heavy riffs of Black Sabbath, and those were completed by ultra swinging rhythm guitars. Henk Vanhee added the final touch with his voice so powerful and strong that it can be compared to the voices of John Garcia (Kyuss, Hermano) and even Robert Plant (Led Zeppelin) Without doubt, Henk is to be considered amongst the best rock vocalists of the Low Lands, and the way he dwells on stage just makes you shiver. Their new and inventive style was baptized by themselves groove rock, a term that fits like a glove. Very soon, the Belgian quality record label BuZZville became aware of the existence of C&A which ended in a record deal. The release of their first official full CD A Trip To The Stonehenge Colony in 2002, was a milestone in the Belgian rock history. With lots of national and international performances, C&A promoted the release, and their absolute pinnacle was being the support band for Monster Magnet in Vooruit, Ghent. The band reached its place at the top of the European groove rock scene rather fast, and became that way one of the leading references within the scene. In 2002 the band spent a lot of time on writing new songs for their sophomore effort. The record is baptized Love Sex Volume and consists of 11 songs that were recorded in the famous Hype Studios in Aalst. As C&A were very satisfied with the work from the well-known producer Dee-J on their debut, they also cooperated with him on Love Sex Volume. The mastering was done at Electric City, Brussels, by Alan Ward, who previously worked with bands such as Black Sabbath and Spoiler. 2003 brought lots of shows in Belgium, Germany and the Netherlands, and C&A were many times accompanied by their American colleagues and label mates Gonzalez. Just before the tour took off, Johan Vandesijpe, a session drummer out of the jazz scene, replaced Peter Gaelens. In May 2004, with Johan on drums, C&A won the first edition of the Graspop Concours. More than 120 bands had taken part in the competition, five were selected for the finale at Biebob, and one gloriously won: Cowboys & Aliens! The jury, not the least, decided unanimously. People of The Music Factory - the Belgian music channel - and journalists from the radio broadcaster Studio Brussels, newspaper Het Laatste Nieuws and some music magazines were convinced without any doubt. The band played a terrific show at Graspop in front of 10.000 enthusiastic people. A few days later, drummer Johan Vandesijpe decided to leave the band due to personal reasons. In the summer of 2004 the band started writing new songs together with guitarist/producer Peter Iterbeke (Channel Zero, Feed, Mantra). Cowboys & Aliens entered the Max Studio in Bruges in August 2004 and stayed there for about 4 months. Mario Goossens (Hooverphonic, Triggerfinger, Winterville) played the drums on all 11 tracks on Language Of Superstars. Mastering is done by Dutchmen Attie Bauw. The well-known producer, who worked with bands as Judas Priest, Scorpions, Latoya Jackson and many others, did a splendid job on the album. In February 2005, Cowboys & Aliens signed a record deal with Apache Productions after breaking up with their long time label BuZZville Records. Meanwhile Peter Iterbeke joined C&A and for 6 months the band is playing shows as a 5 piece. In August 2005 co-founder John Pollentier leaves the band due to family matters and also drummer Mario Goossens decides to leave the band after they played a terrific concert at the prestigious Graspop Metal Meeting for the second time in 2 years!!! While doing auditions the 3 remaining members find Pieter De Wilde as the perfect replacement for Mario Goossens. Pieter, a 23 years old talented guy from Ghent is exactly what the band is looking for. With Pieter beating the skins Cowboys & Aliens played several festivals and club shows during the fall & winter of 2005 including support spots for bands such as Deep Purple, Saxon and Staind.. Conceived with a passion for true and soulful heavy rock, C&A reached another level with Language Of Superstars! Avoiding the clichs and corporate blandness that suffocates the art, this band is a breath of fresh air to real music fans as well as their peers and critics alike. Inspired by the great classic rock of the past (Led Zeppelin, Thin Lizzy,) and a handful of modern pioneers of today (The Cult, Monster Magnet, Queens Of The Stone Age,), Cowboys & Aliens will help pave the road for tomorrow's music with unconscious soul and freedom. Rock should never be safe.

Unfortunatly, the band has split up.

A Trip To The Stonehenge Colony