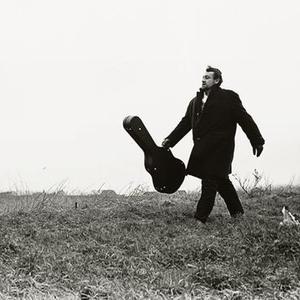 Cornelis Vreeswijk (August 8, 1937 ? November 12, 1987) was a singer-songwriter, poet and actor who was born in IJmuiden in the Netherlands but moved to Sweden with his parents in 1949, at the age of twelve. He trained as a social worker and hoped to become a journalist but became instead a musician whose idiosyncratic humor and social engagement are still gaining him new fans. Cornelis Vreeswijk explained in one of his few interviews that he had taught himself to sing and play in the fifties by imitating his first idols Josh White and Leadbelly.

Cornelis Vreeswijk explained in one of his few interviews that he had taught himself to sing and play in the fifties by imitating his first idols Josh White and Leadbelly. His first album, Ballader och of?rsk?mdheter (Ballads and Insults, 1964, was a hit which immediately gained him a large following among the emerging radical student generation. In this period he also played with Swedish jazz pianist Jan Johansson and his trio. His songs "?ngb?tsblues" (Steam Boat Blues) and "Jubelvisa for Fiffiga Nannete" (Cheering song for Ingenious Nannette) are classics from these recordings. His abrasive, frequently political lyrics and unconventional delivery were a deliberate break with what he was later to describe as a Swedish song tradition of pretty singing and harmless lyrics, "a hobby for the upper classes". Influenced by jazz and blues and especially by the singing style and social criticism of Georges Brassens, Vreeswijk "speak-sings" his "insults", and compels his listeners to pay close attention to the words.

His 1965 loose translation of Allan Sherman's masterpiece "Hello Muddah, Hello Fadduh" remains beloved to Swedes as "Brev fr?n kolonien" (Letter from the summer camp) decades later, and could be said to have passed into folklore.

A political singer with a bohemian lifestyle, Vreeswijk remained controversial in the sixties and early seventies, idolized by his fans but disapproved of by many others for his "rude" language and persistent interest in "unsuitable" people like prostitutes and criminals. Some of his records were blacklisted by the public broadcasting company Sveriges Radio. During this period, he not only wrote and recorded songs now considered classics, such as "Sportiga Marie" ("Sporting Marie") and several affectionate salutes to the ever less employable "Polaren P?r" ("My Buddy P?r"), but he was an actor on the stage, receiving considerable critical acclaim, most notably as Pilate in the Swedish version of Jesus Christ Superstar, and as Tevye in Fiddler on the Roof. He participated in Melodifestivalen (the Swedish preselection for the Eurovision Song Contest) in 1972 with "?-nskar du mej, s? ?nskar jag dej", which finished sixth. He also appeared in movies, including Svarta Palmkronor (Black Palm Trees, 1968), which was filmed on location in Brazil. Spending four months in Brazil began Vreeswijk's lifelong interest in Latin American music and social and political conditions, later seen for example in his Victor Jara album of 1978.

Later in his career, Vreeswijk was to gain increasing fame and a wider audience both for his songs and his other work. He published several volumes of poetry in his lifetime and left a considerable manuscript legacy of poems which have been published since. He also became an important musical interpreter of the works of other people, recording the songs of Carl Michael Bellman, Evert Taube, and Lars Forssell. His fresh, bluesy renderings of Bellman and Taube, who had up to then been classics belonging to the "harmless" tradition that Vreeswijk despised, were artistic and commercial successes which extended his fanbase. His own best-known songs of the later seventies and early eighties tend to be dark in tone, like "Sist jag ?kte jumbojet blues" ("Last time I Went by Jumbojet Blues", a metaphorical bad trip) and "Blues f?r Fatumeh", both addressing heavy drug addiction. Even though in this period Vreeswijk was a prey of tabloid scandal and was in the news for his drinking problem and his debts (about both of which he spoke with frankness) rather than for his achievements, he remained highly creative and productive.

Towards the end of Vreeswijk's life his reputation soared again, aided by the televising of some highly regarded nightclub shows, and by Agneta Brunius' TV documentary Balladen om den flygande holl?ndaren (The Ballad of the Flying Dutchman) in 1986. By the time of his death from liver cancer at the age of fifty, Cornelis Vreeswijk had become an icon of the Swedish music scene, and he was honored with burial at the cemetery of Katarina kyrka, a national cemetery in Stockholm.