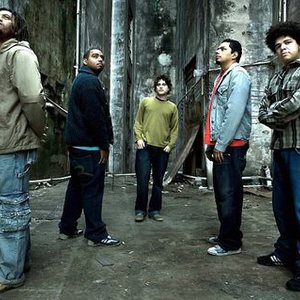 Cordel do Fogo Encantado was born under form of a mounted scenic-musical show in Arcoverde, Pernambuco, Brazil, birthplace of the group. The group consists of the vocalist and panderista Lirinha, the percussionists Emerson, N?go Henrique and Rafa Almeida and the guitarist Clayton. They mixed the musical tradition of the interior - the indigenous tor? (inheritance of the tribe Xucuru), the coco, samba, de reisado, confused her and the singers' music - and the popular poetry of names as Chico Pedrosa, Manoel Fil?, Manoel Chadu, In?cio of Catingueira and Z? da Luz.

The premiere of the show happened in July of 97, with a theatrical structure that included characters, sceneries and the poetry occupying a privileged space. In 99, Lirinha and Clayton went out to take their chances in Recife, where the Line inaugurated participating in Rec-Beat, festival organized annually during the four days of Carnival.

In 2000 they recorded their first album, homonym and independent, produced by the percussionist Nan? Vasconcellos. In their first tour in southeastern Brazil, promoting the album, they called the critic attention and public, filling theaters in Rio and S?o Paulo.

In the movies, the band participated in the soundtrack and in the film, ?God is Brazilian?, directed by Cac? Diegues. In the breaches of the tours, Lira Paes appeared also in the soundtrack of "Lisbela e o Prisioneiro" (?Lisbela and the Prisoner?), of Guel Arraes, in which he interprets the music ?O Amor ? filme?("Love is a film").

In 2002, the group records their second work: "O Palha&ccedil;o do Circo sem Futuro" (?The Clown of the Circus Without Future?), produced by themselves, in independently. Thrown in the first semester of 2003, the work was considered by the critics as one of the most inventive musical works produced in the last years.

In October 2005, the Line throws DVD ?Mtv Apresenta?, the first audiovisual registration of the band. In September 2006 they release "Transfigura&ccedil;&atilde;o" ("Transfiguration"), their third album.