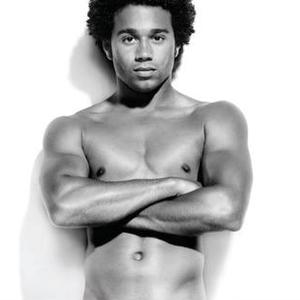 Corbin Bleu Born: February 21, 1989 Brooklyn, New York Corbin Bleu followed in his fathers footsteps and began appearing in television commercials at the age two, for products such as Life cereal, Bounty, Hasbro, and Nabisco. It was at that time he also discovered his love for dance when he began taking jazz and ballet classes, usually the only boy in the class. By the age of four he was a model with the Ford Modeling Agency in New York.

He appeared in print ads for stores such as Macy's, Gap, Target, and Toys R Us, and fashion spreads in Child, Parent, and American Baby magazines, as well as having his image on toys and game packaging. At age six Corbin appeared in his first professional theatre production off Broadway playing an abandon homeless mute in the play ?Tiny Tim is Dead?.

Corbin and his family moved to Los Angeles in 1996 and he quickly landed a recurring role on the television series ?High Incident?. He continued to land small roles in such feature films as ?Soldier? with Kurt Russell, ?Mystery Men? with Ben Stiller, William H. Macy, and Greg Kinnear, and ?Galaxy Quest? with Tim Allen, Sigourney Weaver, and Alan Rickman. He also guest starred on such television shows as ?E.R.?, ?Malcolm & Eddie?, ?Cover Me?, and ?The Amanda Show?. Corbin also continued dancing, eventually becoming one of the first students at the prestigious Debbie Allen Dance Academy. He then attended the Los Angeles County High School for the Arts as a theatre major, this time following in his mother's footsteps who attended New York City's famed High School of Performing Arts. While in his freshman year Corbin was cast in his first lead role in the feature film ?Catch That Kid?. Back in school in his sophomore year he played the lead role of Ren in the musical ?Footloose? and the role of Sonny in the musical ?Grease?. That same year Corbin was honored with the award of Theatre Student of the Year. In the summer of 2004 Corbin became a part of the ensemble cast for the new Discovery Kids television series ?Flight 29 Down?, filmed on location in Hawaii on the island of Oahu. During the summer of 2005 Corbin was cast as Chad in the Disney Channel Original Movie ?High School Musical? which was directed by Kenny Ortega. Being a big fan of musical theatre, Corbin was thrilled to be a part of this musical movie project in which he gets to showcase his dance skills.

Corbin Bleu still lives in Los Angeles with his Mom, Dad, and three younger sisters. In his free time he enjoys singing, playing the piano, seeing live theatre, amusement parks, and hanging with friends. He feels very blessed at this point in his life to have had such wonderful career opportunities. He looks forward to graduating from high school and then continuing on to college. Corbin hopes to do future projects with some of his inspirational artists like Johnny Depp, Denzel Washington, and his Dad. He also would like to do shows on Broadway and record albums.

Corbin thanks his entire family, his teachers, his friends, and his fans for the support he has been given over the years.