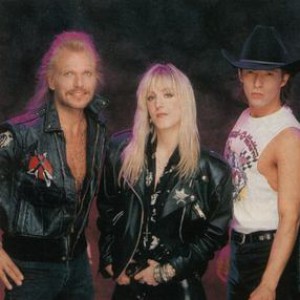 There is more than one artist with this name: 1) hard rock supergroup 2) hardcore punk band from Connecticut 3) hardcore punk band from Ireland 4) band 5) band 6) i don't care 7) whatever 8) jazz 1) Contraband was a short-lived super group featuring some of the biggest names in the 80's metal scene. They released just one album of good time hard rock before members went their separate ways.

1) Contraband was a short-lived super group featuring some of the biggest names in the 80's metal scene. They released just one album of good time hard rock before members went their separate ways.
The band consisted of Shark Island singer Richard Black, L.A.Guns and former Guns N'Roses guitarist Tracii Guns, guitarist Michael Schenker of MSG, UFO and Scorpions fame, Vixen bassist Share Pedersen and Ratt drummer Bobby Blotzer.
Shark Island guitarist Spencer Sercombe also lent his hand at guitar duties. Despite the huge names involved, the album was a commercial disappointment, as the debut single "All The Way From Memphis" got limited airplay. The group was never able to match the material or success of their previous and current bands. Most of the members went on to rejoin their previous outfits, and Black later resurfaced with Jake E. Lee in the short lived Bourgeois Pigs.

2) Contraband was a melodic hardcore punk band from Bridgeport, Connecticut formed in 1985. They were featured on the Connecticut Fun compilation along with bands such as Youth Of Today, 76%Uncertain, and Vatican Commandos. They put out one LP, Girls of All Nations, and recorded a second unreleased LP. They disbanded in the late 80s. Drummer Rich Salvo died of a pulmonary embolism in Tiajuana, Mexico in 1996. In 1997, guitarist / vocalist Jeff Roberts died in a car accident. The only remaining band member is bassist, Terry Swords.

5) Contraband is a band from Ghent, Belgium.

Contraband featured Mae McKenna, George and Billy Jackson, John Martin, Peter Cairney and Alec Baird. Contraband's music was an exciting mixture of Irish and Scots traditional tunes, dramatic folk-rock arrangements of classical ballads and contemporary songs. They attacked their music with youthful vigour and energy. ''We loved playing together'' Mae recalls, ''We always used to play and sing on the way to gigs and coming back from them. Looking back I couldn't have wanted a better band to begin touring with''. Life on the road was an adventure and Contraband toured all over Scotland and England.


8) Contraband was an american jazz/rock group in the 70ies. They recorded an LP, "Time and Space," for Epic Records, and in a four star review Downbeat wrote, "With Weather Report, Miles Davis, and others, Contraband makes music of eclectic inspiration, multi-dimensional in scope, striking of passion."