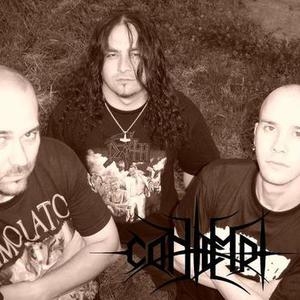 1)
Contempt plays tough straight edge mosh-core like you would expect to hear from NY (Syracuse), along with a lot of metal influence and a touch of Chokehold as well. Their lyics focus on animal rights and the downfall of those who oppose these rights.
Their only full length release is called "One Justice" (1998, Self True/ Catalyst records)


2)
CONTEMPT comes from Kosice, Slovakia and that is definitely one of the most promising bands from the Eastern part of Europe. The band started in 1990 under the name DESECRATOR with the line-up of Robo(drums), Bajuz(bass) and Lubo(guitars, vocals). Soon afterwards Ivo(guitars) joined the band. With this line-up they recorded the "Corner" demo, which was never released because of the bad sound quality. In 1991 Lubo had to do the civil service while the rest of the band have been working on the material for next cassette. After Lubo's return Bajuz left the band and Mato took his place. It was with this line-up that the demo "Cruel Mercy" was recorded. It was also the first material under the name CONTEMPT. The demo wasn't officially distributed, again because of its sound quality.

1993 marked the release of the first official demo entitled "Fanaticism", which comprised 8 songs in the techno-death style. The reception was very positive and led to several live appearances. Unfortunately, soon afterwards Ivo left the band because of military service while Martin decided to quit playing. The second demo "Paradise Garden?" was recorded. It comprised an intro and 5 songs in the typical techno-death style, full of moods and eerie atmospheres. However, true to the tradition, some line-up changes ensued. The band started to prepare a new material in the vein of more aggressive, but still very technical. During that time CONTEMPT recorded 6 songs and MEKONG DELTA's cover "Sabre Dance". The band started playing again - with new member Erik(INFINITY FURY).

In March 2001 CONTEMPT recorded the material for their first official album containing 11 songs and 3 covers of VADER, NILE and DARK FUNERAL. In October CONTEMPT sign contract with Empire Records and get chance to present their music in all the world. Debut album is entitled "The Secret Around Us" with sick artwork painted by Jacek Wisniewski (VADER, DECAPITATED, HADES, REBAELLIUN and many more).

CONTEMPT is the hope of the Slovakian death metal scene. The debut album puts the band on a par with their country-mates DEMENTOR. "The Secret Around Us" features 11 extreme cuts - all very technical, very fast and very brutal. Excellent selective and tons of energy. Three covers will be added as bonuses to possible licenses in Japan and USA. Very real alternative to fans of not only Slovakian death metal. Especially recommended to NILE, TERRORIZER and BRUTAL TRUTH lovers.

3)
Formed in 1995 this Danish outfit soon knew what they wanted from the music they played ;heaviness, melody and a healthy dose of aggression. The band recorded 2 demos and ended up getting signed to the small Danish label Diamond Records and then went into the studio to produce the first album. After having released the album ?Stormforce? in 2002 on Ole Bang's (King Diamond manager) Diamond Records, which marked their debut label release to good critical acclaim. Although the album did well despite near to nothing promotion, the band was focused to keep on making an even bigger impact with their next release. Song writing began in summer 2003 and kept on right up to week before the album was to be recorded. The recording sessions were held at Jacob Hansen's new studio in the middle of nowhere in Denmark. Hansen who previously had recorded such bands as Hatesphere, Raunchy and his own Invocator once again proved to be the ideal choice. Recorded in ten days in February of 2004 the new album shows an incredible step up from the more straight out aggressive debut. Making it a more varied offering the new album shows a more melodic yet still heavy as hell metal record, which is sure to please the old school crowd as well as younger fans. Songs as the opening ?Traitors Gate? makes you feel like ?87? as well as 2004, where as songs like ?Living Fortress? and ?Cul De Sac? makes a statement as being the perfect mix between heaviness and melody. ?Death From Below? (intended title track) and ?Hollow Heart? on the other are straight Thrashers that will get any neck going, whilst the epic ?Serpent of the Crown? and yet untitled instrumental are undeniable the proof of the capability of both musical and writing skills, that have vastly improved. At last there is the Metal hymn that is ?In Venom?, to which there has been made a video. This recording also marked the debut of new guitarist Thorsten Flecken who previously had been in the German band Parchment, Flecken who is a cousin to the Holm brothers helped complete the line up in 2003 and solidifies the strong relationship within the band. For the artwork of the album which is to be known as Death From Below, the band contacted renowned Swedish artist Mattias Noren of progart.com who has done outstanding work for such bands as Evergrey, Arena, Into Eternity and Jag Panzer. Mattias came up with an outstanding artwork which fits the title perfectly. Now it is up the labels to decide who shall be the one which gets away with this masterpiece.

Their latest album is available on their homepage, www.contempt.dk , for free downloading.

5)
An anarcho/crust punkband from England is also called Contempt, active since 1984 and still playing. CONTEMPT have been kickin' out punk rock tunes since 1984. The band came together out of the ashes of three Wolverhampton based Punk bands Vendetta, Seventh Plague and Pulex Irritans and have since gone on to tour all over the UK and in Europe. The band's line-up has changed a lot over the years, but the music remains true and CONTEMPT just refuse to go away...... CONTEMPT PLAY MID TEMPO - FAST ANARCHO PUNK ROCK, WITH POLITICAL LYRICS COVERING ISSUES SUCH AS WAR, POVERTY, HUMAN RIGHTS, ANIMAL RIGHTS, ANTI-FASCISM, ANTI-RACISM AND ANTI-CAPITALISM.....

When Angels Begin To Cry

The Secret Around Us