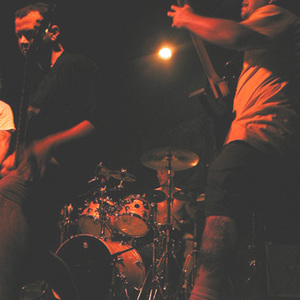 Commit Suicide was born when five people from five different walks of life came together with one objective in mind -- to lay the foundation for the most devestatingly brutal music that is physically possible. Commit Suicide was formed with a few basic ideas in mind: 1) to enjoy themselves, 2) to not take it seriously, and 3) to not worry about performing live. After so many miserable attempts at taking their bands to the "next level" all of the band members had one common complaint about their previous experiences--everyone was always preoccupied with making their band the next big thing.

Commit Suicide was formed with a few basic ideas in mind: 1) to enjoy themselves, 2) to not take it seriously, and 3) to not worry about performing live. After so many miserable attempts at taking their bands to the "next level" all of the band members had one common complaint about their previous experiences--everyone was always preoccupied with making their band the next big thing. This band was to be different--expect nothing and enjoy yourself.

A few months and nine songs later, Commit Suicide was offered its first show. At first the band was hesitant to accept this show since it seemed to compromise part of what they wanted out of this project. Then they figured what the hell. Playing one show wouldn't hurt and it could be a great time since it was with friends Burnt By The Sun.

The date was April 12, 2001, and the band entered the venue to perform what has turned out to be a career changing show for all of them. After playing a flawless set, spirits were high, and they all realized that they all missed performing. Then Willowtip Records approached the guys to ask if they would be interested in releasing their first full length CD on the record label. A little bewildered but enthusiastic, the band made their commitment to Willowtip Records.

The band entered The Mars Compound September 14, 2001, to record their debut CD Human Larvae (Earthly Cleansing). The full length was engineered by Bill Korecky (Incantation, Earth Crisis, & Integrity) and has gone on to receive monumental praise in the extreme music scene. The reception of Human Larvae led to the opportunity to release a split CD with Maryland's Misery Index (ex Dying Fetus). Both of these discs have done extremely well, selling a combined 8,600 copies, exceeding everyone's expectations of a band that was still less than a year old.

While the members of the band appreciated the success of both discs, they wanted to set Commit Suicide apart from other bands. They decided a tour was in order. In July of 2002, the band embarked on their first 3-week tour with label mated Harakiri and Kalibas. Armed with equipment and enough cans of tuna to feed a third world country, the band set out to spread their vision to as many people as possible. The tour took the band to every major city up and down the east coast and the southern midwest. Suddenly Commit Suicide was being invited to prestigious festivals and clubs of vast notoriety. The band realized that to keep this machine going, the members had to maintain the same philosophy they had started out with--enjoy yourself and maintain your integrity.

In February 2004 Commit Suicide entered Watchmen Studios to record their second full-length Synthetics with Doug White (Sulaco, Kalibas, PsyOpus). Synthetics, while reminiscent of their debut, showcased the musicianship of the band and took the band into a more progressive death metal genre. 2004 also proved to be a turbulent year for the band which led to the departure of their second guitarist.

In 2005 the remaining four members have decided to take a break and focus on their personal lives/projects until the time is right to reveal the next chapter of the band.

The band recently reunited in 2006. No words on a new album or upcoming tours.