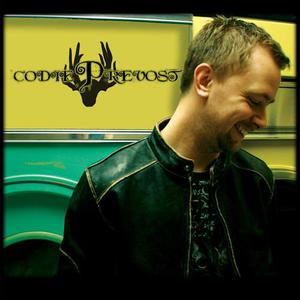 Welcome to Archerwill, Saskatchewan -- birth place and home away from home to country singer and songwriter, Codie Prevost. Surrounded by a loving family in a farming community, Codie entered the world of music with his mother playing guitar at family celebrations. When the guitar wasn't ?strummed,? background music of Johnny Horton, Loretta Lynn and Johnny Cash found its way to the forefront. Codie experienced live performances of those just starting out ? Martina McBride ? and although he was only eight, the music bug bit.

Surrounded by a loving family in a farming community, Codie entered the world of music with his mother playing guitar at family celebrations. When the guitar wasn't ?strummed,? background music of Johnny Horton, Loretta Lynn and Johnny Cash found its way to the forefront. Codie experienced live performances of those just starting out ? Martina McBride ? and although he was only eight, the music bug bit. Upon college graduation and with a newly purchased acoustic guitar, Codie was introduced to Jessica Robinson for singing lessons that later brought him to the attention of Nashville producer Steve Fox.

In 2002, Codie auditioned for a talent contest in Zenon Park, SK. There, he met his current manager, Al Le Blanc and a partnership quickly forged. Songs were written and recorded with Steve Fox but the challenge became how to secure the financial resources to record the first album. Despite a carefully devised business plan, attempts for funding from conventional banks were met with chagrin. Every ?no? moved Codie and Al to ?go? in the direction of Community Futures.

Established in 1986 by the federal government Community Futures has played a significant role in entrepreneurial and community development. With that in mind, Codie's business plan was presented during the first meeting; his second meeting had him shaking hands with management after singing a few songs and playing his guitar. Just before his 20th birthday in December 2004, the Community Futures Board in Newsask approved Codie's funding requirements. Recognizing Codie's talent and aligning with his dream, his debut album ?The Road Ahead? was created.

The success of Codie's debut album was more than anyone could imagine. Released in 2005, ?The Road Ahead? yielded nationally charted singles. The momentum enthusiastically continued with over 150 performances. This translated to multiple nominations at the 2006 Saskatchewan Country Music Awards where Codie won The Rising Star Award and Album of the Year for ?The Road Ahead?. His manager, Al Le Blanc was awarded Manager of the Year. Throughout the entire process of performances and award acceptance speeches Community Futures was graciously acknowledged.

In 2007, Codie opened for Doc Walker, Emerson Drive, Gord Bamford, Aaron Pritchett, and Deric Ruttan while the creative process was in high gear for Codie's next album. The dynamic artist and manager duo came up with an ingenious idea ? a six-song mini CD, called a ?6-Pak? ? the first of which is named SPIN. Co-written with Willie Mack, ?Spin? took Codie's music to his best radio audience ever with the follow up release of ?Good Livin'?, co-written by Jason Blaine to even greater heights. SPIN, was launched to the supportive Archerwill hometown crowd in August 2008. In September 2008 the Canadian Country Music Awards were held in Regina and Codie was selected as one of eight New Artist Showcase Spots to perform out of hundreds of submissions that were received.

In early 2009 Community Futures called upon Codie to be Western Canada's front line spokesman. His winter and spring travels in Saskatchewan, Manitoba and Alberta had Codie touching thousands of lives during ?The Road Ahead? tour ? appropriately named given Community Futures support of Codie's debut album.? High attendee and media success of this tour resulted in some CF offices boasting 90% of loan targets being met for the entire year after Codie's visits. Codie was re-invited and revisited the province of Alberta during the Fall of 2009. A Community Futures television commercial was created and filmed featuring Codie and continues to be aired in the province of Saskatchewan on CBC and CTV reinforcing the message of Community Futures alignment with Codie's dream.


Successful songwriting sessions in Nashville coupled with a personal invitation to perform at the highly acclaimed SxSW Music Festival in Austin, Texas, was followed by an unprecedented 15 nominations at the 20th Anniversary of the 2009 Saskatchewan Country Music Awards handed out in Nipawin, SK.? Family, friends and fans witnessed as Codie Prevost and his band took the stage 10 times to accept 10 awards over the course of the April 25th weekend including the highest accolade, Fans Choice Entertainer of the Year, Male Vocalist of the Year, and Album of the Year for SPIN. Every award had Codie realizing his dream and acknowledging the support of everyone that made his current wins possible and achievable.

As 2009 comes to a close, Codie Prevost fans in 2010 can look forward to the embarking of
Codie Roadies, major sponsorship and tour announcements and the much anticipated release and launch of Codie's third album.