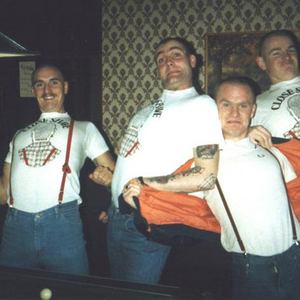 The band started at Birmingham in 1986 under the line up: Rich - vocals, Paul (Dirk) - guitar, Neil (Lurch) - bass, Steve - drums. With this line up they played a few gigs and recorded some demo tracks and also recorded the song 'The Law' for 'The Sound Of Oi!' compilation. Rich joined the army and was replaced by Martin (Fluffy). They released their first lp in 1988 under the title 'Oi! Kinnock Give Us Back Our Rose' and in 1990 their second lp 'Hard As Nails'. Neil took the vocals duties when Martin left the band and Sid from Section 5 came to bass.

They released two 7'', 'Keep On Rockin' (1991) and 'Attack' (1993), two songs for 'British Oi! - Working Class Anthems' (1993) and the third-last lp 'Lone Riders' in 1992. Also in 1992 there was plans to release a third 7" with the songs "Money" and "Not The Skinhead Way" but these plans fell through when the songs were released (Without Close Shave's permission) on the compilation 'Last Chance' (1992). As of mid 2011 Close Shave have reformed to tour and record once again with new guitarist Jedd and the return of Fluff on vocals, this line up have recently recorded a soon to be released Live Album with a new studio album in the pipeline.

Oi! Kinnock Give Us Back Our Rose