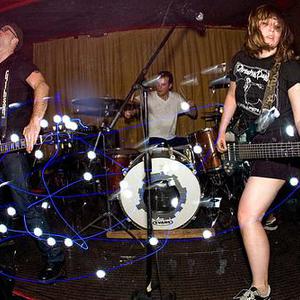 Clockcleaner was a punk/noise rock band from Philadelphia, Pennsylvania. The band consisted of John Sharkey III on vocals/Guitar, Karen Horner on Bass, and Richie Charles Jr on drums. The trio had drawn comparisons to The Jesus Lizard, Big Black, Nirvana, Flipper and even harsh noise band Whitehouse. Their influences include Cromags, gg allin, Sun Ra, Brainbombs, Albert Ayler, and the first Skrewdriver LP. As they progressed, they began more heavily embracing a sludgy post-punk influence.

Formed in 2004, Clockcleaner released an EP called The Hassler on the now defunct Philadelphia hardcore label Manic Ride Records. The album echoed early 90s noise rock, with high pitch guitar sonics and a thumping bass sound. After touring for the EP original bassist R. Slegel left the band, and was replaced in the studio by John Sharkey. In Early 2006 they released a 7" on Baltimore's Noise/Avant label Hit-Dat Records (Missing Dick b/w Crucifucks' cover By the Door). Soon to follow was their first full length, released on another Baltimore label, Reptilian Records. The album was called Nevermind (a sarcastic ode to Nirvana's 1991 release). John Sharkey has insisted that the title was a joke to piss people off (He has even gone as far to call Nirvana "dogshit" in a dusted magazine interview in 2007).

"People think that record is like the Bible," says Sharkey via phone from his North Philadelphia home. "Fuck that record. It's completely piss-poor. It did not stand the test of time. I can understand the mania that it caused, and I mean, it's good because hair metal sucked, but it almost caused another fuckin' trend that I have no concept of at all ? alternative or modern rock. So, Nirvana were dogshit, and I thought it was funny to name our record Nevermind. I kind of wanted people to react like, 'What balls! Who the fuck are these assholes?'"

"Nevermind" was considered by many to be somewhat of a departure from their punk sound. Layering delayed vocals, elements of free jazz and washes of harsh noise. Nevermind had more in common with many of the mid to late 90s siltbreeze bands such as Harry Pussy and The Dead C. After the album was recorded Karen Horner became the permanent bassist. Her first show with Clockcleaner was opening for The Melvins. The album did well with many critics and in late 2006 the group signed to Load Records. They've finished recording an LP for Load slated for fall of 2007 and they also released a new 7" on drummer Richie Records (Frogrammer B/w Early man) and a fan club only 7" on Hit-Dat Records slated for Spring 2007.