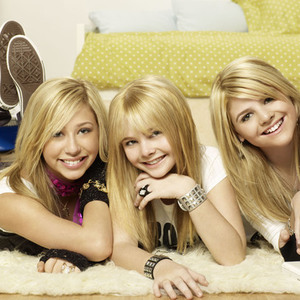 Originally known simply as 'Clique' (2004-2007), they later changed the name to the Clique Girlz in 2007. The Clique Girlz are the youngest girl pop rock band to be signed to a major record label! The original group composed of sisters Paris Monroe and Destinee Monroe, and their friend Ariel Moore. They have released an album, 'Incredible' in Japan which can be purchased in specialty shops or online around the world. For personal reasons, Ariel left the group. Auditions were held and Sara Diamond was chosen to join the group.

Here is a full biography taken from Wikipedia:
2004?2007: as Clique
In 2004, Ariel Moore met sisters Destinee and Paris Monroe at school, and developed a friendship.[1][2] The three started to perform together as a group, named Clique, with the Monroes' mother, Lenore, father Ed Ariels Mom Amanda and Dad Lou. Manager Howie.[3][4]
The group recorded the song "Lemonade" for Alex's Lemonade.
In 2006, the group attended a "meet and greet" before a Backstreet Boys concert, where band member Howie D invited them to open the show.[5] They opened for other artists including Billy Ray Cyrus, The Click Five, Kirk Franklin, and the Jonas Brothers.
2007?2009: Incredible


The original lineup of Ariel, Paris, and Destinee
At the beginning of 2007, they left their hometown to go to Hollywood for a meeting and never left.[2][6] Jimmy Iovine signed them to his Interscope label.[7][8] The name of the group was changed to Clique Girlz and they started to work on their first album, Incredible.[5]
In March 2008, they traveled to Tokyo, Japan, for the first time where they performed their version of the US National Anthem at the opening game of MLB, between the Boston Red Sox and the Oakland As, at the Tokyo Dome.[7]
The following month, they released a three-song EP. That summer the girls did several shows at Six Flags and other venues opening for artists including Drake Bell and Demi Lovato,[9] performing songs from the girls' upcoming album. They later traveled to Japan for the second time to promote their upcoming album. They appeared on several Japanese TV shows and performed at the MTV Vibrations 2008.[10] Their first studio album, Incredible, was released August 27, 2008 in Japan.[11]
They performed at the Fourth of July Philadelphia Fireworks Show and Macy's Thanksgiving Day Parade,[8] and also participated in special events including the Grammys, Kids Choice Awards, Teen Choice Awards and MTV Movie Awards.[5]
Music videos for the songs "Then I Woke Up",[12] "Incredible", [13] and "You Think" were filmed the same year and the girls did several TV appearances on shows like The Today Show, performing songs like "Incredible", "The Difference In Me" and "Then I Woke Up".[14][15]
An acoustic version of their song "Incredible" was included in the AT&T Team USA Olympic Soundtrack 2008.[16] The girls were also the official opening act for the Cheetah Girls nation-wide "One World Tour".[7]
2009: New lineup
On January 24, 2009, Tommy2.Net reported that Ariel Moore had left the group.[17] Then on January 31, auditions were held at Center Staging in Burbank, CA to find a new member.[18] On that same day, Ariel Moore posted a video on YouTube announcing that she had left the group for personal reasons.[19] In late February, pictures from a photo shoot for Baby Bottle Pop surfaced featuring the new member, Sara Diamond. On February 27, they confirmed on their website that Diamond joined the group and did their first ever interview with Tommy2.Net.[20] Diamond left the group in late April.
2010: Destinee & Paris
In February 2010 the girls posted on their new website that their new album will come out in Summer of 2010. No album information has been posted since then. On DestineeandParis.com, they had snip-its of 4 songs from their upcoming album: Go Your Own Way (Cover from Fleetwood Mac), Sweet Sarah (refering to Sarah Diamond who was part of the Clique Girlz), It's Over and Heart of Mine. Since nothing has been confirmed we only know that their album will release in 2010.
Members

Ariel
Ariel Alexis Moore (2004?2009)[21] (born July 27, 1994). Ariel's group symbol was hearts "because she always wants to help others and has a big heart",[23] and she has also said that she chose that symbol because she always liked to draw hearts.[1] Her signature color was purple.[23] Ariel's other hobbies are dancing and reading.[3] After leaving the group, Ariel released her first demo single, titled "Living on The Edge", and then a duet 'Stronger' with her younger sister, Alexandria Nicole Moore. Since Ariel left the group, she has formed a new group called NMD.
Sara
Sara Diamond (2009) (born January 5, 1995)[24] from Montreal, Quebec, Canada has been singing and performing since age five. She has also opened for singers Roberta Flack and Bonnie Tyler at Montreal's Bell Centre. She also acts, models and plays piano. Her symbol was a heart, and her color was red.[24] Since leaving,she has recorded songs such as "Me and My girls" and "Hey!Hey!".