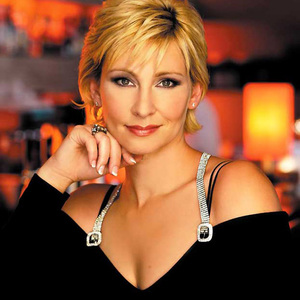 Claudia Jung (born Ute Krumenast April 12, 1964 in Ratingen , Germany ), is a German schlager singer and politician. From 1974 till 1980 Claudia Jung attended the school Liebfrauenschule in Ratingen. As a child she took guitar lessons and during her schooltime she sang in the Amt-Angerland-Chor. Before her career in show business she worked as a photo lab technician, a dental assistant and a tourist guide in Italy . Every now and then she performed as a non-professional singer.

In 1984 she met the musicproducer Adam Schairer with whom she made experimental recordings. She made her first single releases in collaboration with Schairer and the composer and producer Jean Frankfurter as well as the lyricist Erich Offierowski. The debut album Halt' mich fest ("Hold me tight") was released in 1988. Since 1999 her albums have been produced by Hans Singer with Andr? Franke as co-producer.
During her career, Claudia Jung has achieved multiple gold and platinum records. She has also been granted various prizes such as the Echo-Preis ,Goldene Stimmgabel and the Fred-Jay-Textdichterpreis. Jung has had duetts with many international stars including Richard Clayderman (e.g. "Je t'aime mon amour"), Rosanna Perinic ("Domani l'amore vincer?"), Nino de Angelo ("Hand in Hand") and Cliff Richard ("Mistletoe and Wine"). She sings mainly in her native language, German, but has also interpreted songs in English, French and Italian.
Since November 2007 Claudia Jung has been the protector of a childcare project for traumatized children who have lost faith in themselves, other people and the surrounding world.
On March 2 , 2008 Claudia Jung - officially Ute Singer - was elected as representative of the group Freie W?hler in the county council of Pfaffenhofen </wiki/Pfaffenhofen_(district)>. She also works as a councilwoman of the Christliche W?hlergemeinschaft in the community of Gerolsbach . In the state election on September 28 , 2008 Claudia Jung was elected as representative of the Freie W?hler in the Landtag of Bavaria .
Private life
Claudia Jung married the musicproducer Hans Singer in 1997. Together they have a daughter, Anna Charlotte. In 2004 >, she recorded a duett "Heut' fliegt ein Engel durch die Nacht" with her daughter. The family has been living in a farm in Gerolsbach since 1998 .
This article is based on a translation of an article from the German Wikipedia <http://de.wikipedia.org/wiki/Hauptseite>
1-^ <http://www.claudia-jung.de/index_musik.html>
2-^ Landeswahlleiter Bayern <http://www.landtagswahl2008.bayern.de/tabz1901041.html>

All The Best CD2

All The Best CD1