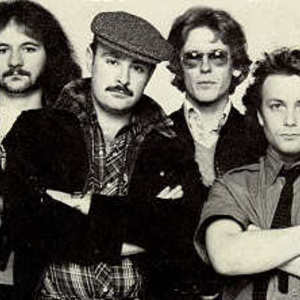 City Boy was a moderately successful British rock band in the late 1970s, characterised by complex vocal arrangements and heavy guitars. Their most popular songs were 5-7-0-5 and The Day the Earth Caught Fire. Their first five albums were produced by Robert John "Mutt" Lange. In the early 1970s Lol Mason, Steve Broughton, Max Thomas and Chris Dunn were playing folk music in the Birmingham area.

In the early 1970s Lol Mason, Steve Broughton, Max Thomas and Chris Dunn were playing folk music in the Birmingham area. They toured the clubs of the Midlands until, towards the end of 1975, they decided to try it the professional way. Meanwhile Broughton had begun to write quite impressive songs. They were offered a recording contract by Phonogram Records on condition that they add drums and electric guitar. This prompted them to recruit Roger Kent and Mike Slamer.

Their first albums failed to impress the audience, although some critics gave quite favourable reviews to City Boy (1975) and Dinner At the Ritz (1976). It was not until 1978, and their hit song 5-7-0-5, and the subsequent album Book Early, that the public realised their potential. The single reached the Top 10 of the British charts and the album scratched the Top 30 of the UK Albums Chart.

They were able to repeat their success with their 1979 album, The Day the Earth Caught Fire, and its title song as a single release. After that, Broughton left the band, but they had one more successful album with Heads Are Rolling in 1980. Many critics believe this one to be their best, but then their record deal expired. Most of their albums were labeled and distributed by Vertigo Records, also known as Polygram and Polydor. In 1981 one last record, It's Personal, failed to attract any attention, and was only released in Scandinavia. In 1982, the band split up.

Most of City Boy's albums were labelled and distributed by Vertigo Records, also known as PolyGram and Polydor.

The Day The Earth Caught Fire

Dinner At The Ritz