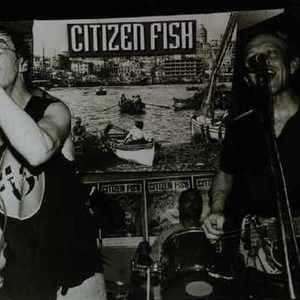 Citizen Fish are a ska punk band formed in 1989. Based around Bath, England, the original members were Dick Lucas (vocals/words), Jasper (bass), Trotsky (drums), and Larry (guitar). Following their first album, Free Souls in a Trapped Environment, Larry left the band and was replaced by Phil, who, along with Dick and Trotsky, had previously been a member of the seminal British punk band, the Subhumans. Jasper and Dick had previously played together in Culture Shock. In 2006 Silas replaced Trotsky, who is still playing with the Subhumans.

The band is known for their lyrics, which often make strong social and political statements, dealing with themes such as anti-consumerism, vegetarianism, questioning of the status quo, and the general encouragement of people to get along with one another.

It is rumored that the band Citizen Dick from the movie Singles is an homage to Citizen Fish and its lead singer.

In 2006 they toured with and recorded a split LP with punk band Left&ouml;ver Crack. This was the first Fish activity in recent years, as the members have been concentrating on Subhumans activity as of late (they did do a small East Coast/Midwest U.S. tour consisting of off-the-map bars and basements in the summer of 2005, much to the delight of dedicated fans).