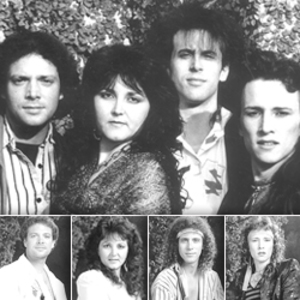 Citadel ? (same as Citadel&reg; and also found at Citadel) is a folk rock prog metal symphonic band that has been around since the late seventies. Through many changes in members, one element remains constant; there is always a Whitman in the band! In 1979 Citadel? started as a three-piece with the release "Silence of Surrender" on the QFM Project LP and live simul-cast Agora Concerts. Concerts, videos & album releases followed, as well as their pioneering of a cable variety show (VVTV) and a 3 year tenure as a band-in-residence for The Recording Workshop.

In 1979 Citadel? started as a three-piece with the release "Silence of Surrender" on the QFM Project LP and live simul-cast Agora Concerts. Concerts, videos & album releases followed, as well as their pioneering of a cable variety show (VVTV) and a 3 year tenure as a band-in-residence for The Recording Workshop. After migrating to Hollywood, the band continues to record and perform. In 1990 their CD "The Citadel of Cynosure & Other Tales" was chosen as "Best of KLOS Local Licks" in Los Angeles and hit the top of many radio playlists, from the US to France, Russia to Germany, Japan to Spain, Hollywood to Mailbu with hits like ?Dungeons of War? ?Stygian Barque? and ?Winter's Dying?. Since then, their albums continue to elude the mainstream and are mostly sold through a giant mailing list created over the decades - as well as CDBaby and their retail and digital outlets.

Live Citadel? Shows and Concerts released on DVD from Ohio to California include The Agora (Newport), Legend Valley, Madame Wongs, Gazzarri's, The Troubadour, Roxy, Gilley's Charlie Horse and UCLA's Royce Hall. This self-signed band also originated and co-produced the first ProgFest at Royce - and this single event spearheaded a resurgence of progressive music, birthing countless similar festivals across the globe that continue to this day!

Now based on the West Coast, Citadel? is always changing members around founder, G. Douglass-Whitman. The newest CD features new and previously unreleased songs, ?kinda like Seals and Crofts meets Judas Priest with a little Shadowfax and Steppenwolf thrown in for grace and growl? Whitman concludes.

Don't worry if you can't keep all your Whitmans in order, all you have to do is light up and listen. Because, regardless which Whit is which, Citadel? is always about the total 'experience' in music and videos. Art, lyrics, sounds, effects and guitar strings made from hemp (just kiddin') Citadel? has a hit for everyone's appliance!

Until then, Citadel ? is on CDBaby, iTunes, Rhapsody, Audiolunchbox and tons of other places online. The band has several official sites maintained by past and present members, family members and extreme fans - the key is, always make sure you see the little "R" in a circle (?) or the "TM" (?) next to the name!

... oh yea, this is the same Citadel? who co-founded and co-funded the very first PROGFEST!

CITADEL? A Registered Tradename - All Rights Reserved and Used With Exclusive Permission - Indie From The Start - The Progfest Pioneers

The Citadel of Cynosure & Other Tales