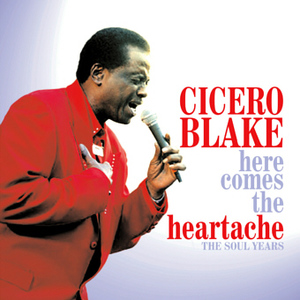 Born on February 20th, 1938, in Jackson, Mississippi, Cicero moved to Chicago with his family in the early 1950s and settled on the west side. Blake singing career began in a church choir, then the Golden Tones while still in high school, and he performed in military shows in the Air Force. Cicero Blake's was the original lead singer of the group, who evolved into the Kool Gents, the group that sprung Dee Clark After leaving the group Blake made many solo recordings for small Chicago labels (Brainstorm, Renee, Success, etc.).

When he got the chance to record for a major label-Brunswick Records in 1967--the two tracks he cut "You Got Me Walking," and "A Woman Needs To Be Love" were shelved for 20 years. He recorded his first single, "Don't Do This To Me" for Success Records in 1962; though he never charted, many of his R&B singles "Sad Feelings," and "If I Had My Way," found acceptance with Northern Soul lovers. "Love Is Like A Boomerang" received more attention then previous efforts.

Blake continued working and recording throughout the 70's, 80's, and 90's while holding down a job working for Cook County as one of the Maywood Park Districts' commissioners. He recorded two albums for the California-based Valley Vue Records, followed by a pair of LPs for Johnny Vincent's Ace imprint. In the 2000s Blake had only two albums to his name- one for Mardi Gras in 2003 and one for Hep' Me in 2008. A new album is due in 2010.

It's You I Need