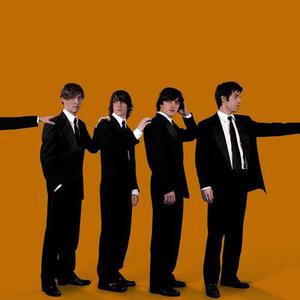 Chucky Danger Band changed their name to Paper Lions, which all their subsequent works will be released under. Impact im-pact n. 1. The striking of one body against another. (See: collision.) 2. The effect or impression of one thing on another. (See: influence) 3. The power of making a strong, immediate impression (see: The Chucky Danger Band) (no, really - see the Chucky Danger Band. First chance you get) Impact. It's what separates a good artist from a great one; makes talented musicians into stars; and turns another ho-hum evening out into a memorable event.

1. The striking of one body against another. (See: collision.)
2. The effect or impression of one thing on another. (See: influence)
3. The power of making a strong, immediate impression (see: The Chucky
Danger Band) (no, really - see the Chucky Danger Band. First chance you get)

Impact. It's what separates a good artist from a great one; makes talented musicians into stars; and turns another ho-hum evening out into a memorable event.

And it's the raw, solid impact they bring to every show that has set The Chucky Danger Band apart from the pack since the first time they took to the stage. From their trademark tailored black business stage attire to the brilliant songwriting and infectious sound, the band has a rare presence and charisma that is bringing audiences and music industry insiders alike into the fold.

When John MacPhee returned from an overseas aid trip to Cambodia in 2004, he came home to Belfast, Prince Edward Island with a pocketful of songs he'd written on his trip. He sat down and played the songs for his older brother Rob and childhood friend Colin Buchanan and the three began tinkering with the simple arrangements, turning them into layered melodies for a full band.

It wasn't long before they realized they had something special here - rich, textured songs with velcro hooks and poetry in the lyrics. With John MacPhee on acoustic guitar and lead vocals, Rob MacPhee on bass, and Colin Buchanan on lead guitar, they were one set of talented hands away from a band. David MacDonald of nearby Brudenell, Prince Edward Island was recruited to join the group as drummer and percussionist and The Chucky Danger Band was born.

It was at the Prince Edward Island Music Awards in late 2004 that the impact was first felt. At a post-awards show party, the newly-formed group with a moderately successful single stepped out in front of jaded music industry professionals and from the first note, heads in the room swivelled. The prevailing sentiment: "Wow. Who are these guys?"

Within a few months, there was no mystery remaining as the boys combined
high-octane stage shows with hit singles ("Sweet Symphony" and "Marching Machine") to generate enormous buzz both on and off their tiny Island.

CBC's Atlantic Airwaves asked them to record a studio album, and after seeing one of the band's live performances by chance, gold/platinum producer Paul Milner (Robert Palmer, Kim Mitchell, I Mother Earth, Glass Tiger, Northern Pikes , to name a few) immediately came on board with Glen Meisner and Carl Falkenham to produce the CBC sessions.

The buzz began to turn into a roar. Every time The Chucky Danger Band stepped out on stage they gained new fans and supporters both inside and outside the industry. Their fan base was growing exponentially and with every eye-popping industry show they were earning spring-loaded standing ovations and the "can't miss" label.

Stellar showcases at the East Coast Music Awards, show-stealing turns at the Stan Rogers Festival, and three ECMA nominations in 2006 made sure that label would stick.

2006 saw the boys win their first East Coast Music Award, getting the nod for Best Pop Recording of the Year and a much-sought-after chance to perform on the national TV broadcast from the Awards Ceremony. Their debut full-length CD, Colour, was released and is generating rave reviews and more excitement. And a modest touring schedule is expanding by leaps and bounds as more and more venues - and a growing fan base - feel the impact that The Chucky Danger Band generates.