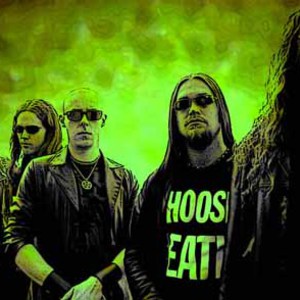 Chton is a death metal band from Trondheim, Norway, and the name Chton is derived from the word "chthonian" meaning: "...pertaining to the deities, spirits and other beings dwelling under the earth" and is pronounced [k't?n]. The band was started in late 1999 from the fundaments of a more black metal-inspired formation involving founding members ?yvind (guitar) and Chris (bass). In need of a 2nd guitar-player, Chris approached Torstein (guitar) who had just lost his place in the thrash metal-band Frost (now Imbalance) due to relocation of the band to Oslo.

The band was started in late 1999 from the fundaments of a more black metal-inspired formation involving founding members ?yvind (guitar) and Chris (bass). In need of a 2nd guitar-player, Chris approached Torstein (guitar) who had just lost his place in the thrash metal-band Frost (now Imbalance) due to relocation of the band to Oslo. Not long after that Vidar, a fellow bandmate of Torstein in Frost who also refused to relocate to Oslo, was asked to join in on drums. And then, just before the dawn of the new millenium, the fundament for Chton was laid - or rather "Nil Admirari", as the band was called briefly in the very beginning.

With this line-up, merging their backgrounds in black, death and thrash metal, song after song was written, but no recordings could be planned or gigs could be booked without any vocals on the songs. ?yvind then had a brief role as guitarist in the more folk-inspired band Lumsk where he contributed somewhat to the songwriting on their debut album, but chose to quit and devote all his time to Chton.

Four instrumental songs was then recorded as a semi-pro rehearsal-tape in the autumn of 2001, with plans to finish the songs with vocals when they found a worthy vocalist. Torstein was also approached by long-time comrades in Manes to join them on bass, where he's now a full-time member (without that meaning any less dedication to Chton). Finally in the spring of 2002, after numerous attempts to find a dedicated and talented vocalist, Terje (earlier guitarist/vocalist in Eternal Silence which released an EP on the US label Baphomet Records run by Necrophagia mainman Killjoy) came onboard with full force, and in October 2002 Chton recorded their first official selftitled two-track demo.

Not long after that, Chton had to find a replacement for bassplayer and founding member Chris, who chose to dedicate his full time to his studies. Kenneth was quickly found, a long-time friend of the band, and his talent soon proved resourceful for Chton. Later in 2003 two amateaur-filmmakers and friends of the band made a zero-budget video for the track Book of Black Earth from the demo, which proved to give Chton more attention than they had hoped for. The video recieved a #7 ranking among the top-ten requested videos after it's first month of rotation at the Norwegian national tv-program Metal-Svisj.

Proud of their work, as they should be, the two directors of the Book of Black Earth-video entered it in an Scandinavian amateaur-video contest where it won silver, and it also went on to win silver in the European finals. Both songs off the 2002 demo found their place on several underground compilations, and it was also later re-released in 2003 as a split-cassette with the band Supreme Lord from Poland on Time Before Time Records.

This two-track demo got Chton much attention, and finally got them signed to the UK label Retribute Records for the release of their debut album Chtonian Lifecode in late 2004. The album was recorded in Godt Selskap Studio in Trondheim (Necrophagia, Bloodthorn, Keep of Kalessin, Griffin etc.), and was released in late 2004. Vidar (drums) became a father just weeks before Chtonian Lifecode was released, and Vegar (Keep of Kalessin) took his place as session-drummer for the several concerts promoting the debut album. Not long after getting back behind the drumkit Vidar chose to leave Chton to focus on his family and other activities. Vegar was soon asked, and became his permanent replacement. The contract with Retribute Records was for one album only, so in late 2005 Chton recorded three new tracks as a promo for labels entitled Death Awaits. This was the first recording introducing Vegar as a contributing songwriter and drummer in Chton.

Chton is an active live-band and has shared a stage with bands like Morbid Angel, Mayhem, Behemoth, Zyklon, Amon Amarth, Keep of Kalessin, Bloodthorn, MANIFEST, Witchhammer etc., and opened the mainstage of the fifth annual Inferno festival in 2005 plus played other festivals like Hole in the Sky, Eat the Rich, and Southern Discomfort.