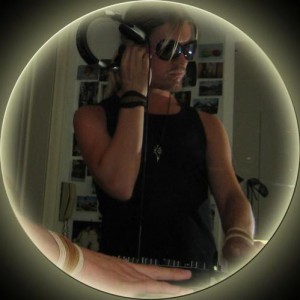 1) Andy Nilsson (..78) & Linus Eriksson (..82) from Sweden is the companions behind the continuing project Chromosome, lived previously in Metropols like Amsterdam, Barcelona, the Balearic Islands and in modern days in a villa at the Portuguese Riviera. Education and background: Schooled Musicians and Sound Technicians, conducting choirs at age 7, bought first synth at 8 and father of Anders released 13 albums as violinist and inspired Chromosome to pursuit own career.

At 18 while working with musicals and doing sound engineering for live bands like Latin Kings, they discovered the mystical magical dimension of trance, and love as a foundation for living. ?Discovering oneself as the source? as Alex Grey so articularly puts it. This led them to produce their first Vinyl release on the now legendary Spiral Trax. From then until now has been a constant time zone shifting, touring the most insane sceneries n.. festivals, The Boom, Natraj Temple, Rainbow Serpent, Trancendence, Ozora. Developing soft n.. hard-ware for the Gypsy MidiSuit with Sonalog in the UK. Remixed artists like: Jean Michelle Jarre, Bamboo Forest, Silicon Sound, Logic Bomb. Praised by Alex Ligowskij as ?...Wunderkind of 21st Century...? and received ?..Great Works..? reviews by the number one label Dragonfly Records for this Album.

2) Chromosome is currently a band of three members playing a style that is quite hard to define. Although it is obvious that the main influence of it's output can be found in the progressive/symphonic bands of the early 70s: Lot's of instrumental passages with extended solos. Wim Abbring (Bass guitar & Electric Guitar) & Rob Wijkstra (Keyboards and vocals) survived the 1st incarnation, and set up the second with percussionist Daan van Dalen.

In early summer 2004, Chromosome was founded by Wim Abbring, Robert Prijs (Guitar) & Rob Wijkstra, soon to be joined by percussionist Bram Nigten. Although the line-up had potential, Robert Prijs would suffer from a long stay in the hospital just 3 months after the group has started. A repetoire was written and performed only at a few (mostly flopped and/or unsuccesful) festivals. In summer 2005, after the performance at the Annermarkt (A small concert at a local market), Nigten left the band.

In the spring of April, 2006, the project was resurrected after Daan van Dalen joined the band. With the new percussionist on board, the band performed a extended musical piece called "Suit", which was recorded and shot on video, of which fragments will appear on this site shortly. It would be also the last time Robert Prijs would perform with the group, leaving a week after the recordings were made. After Prijs left, the three remaining members continued with Chromosome.