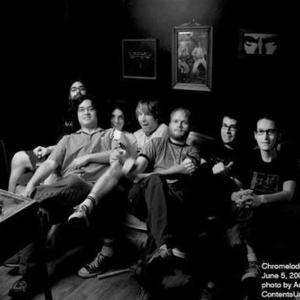 Chromelodeon were an 8-piece indie rock band from Philadelphia, Pennsylvania. They are known for their epic live shows as well as their unique instrumental sound. Their music is achieved by utilizing a combination of synthesizers and traditional instruments from guitars to accordians. The band's body of work consists both of original songs and instrumental rock covers of video game music. The band was formed by eight friends from high school in 2000.

The band was formed by eight friends from high school in 2000. The following year, their first full length album was released, In the Year 20XX, which opens with a cover of "Wily's Castle" from the Nintendo game Mega Man 3, and is followed by 3 originals; the last track, "Eloquence is Dead," spans 13+ minutes. Two other albums came out in 2005. The band's second release was a made up solely from covers of the background music themes from the video game Ninja Gaiden II. This was followed by the completely original Heart of Sawdust album which consisted of six untitled tracks.

The band held their final performance on April 27, 2007, at the The Church in Philadelphia PA, with other Philadelphia bands Hail Social and The Private Sea. At the show, they released a limited run of 100 copies of their final album, which consisted of all the previously unreleased original material that Chromelodeon performed live since the summer of 2005. The album has since been made available to download for free.