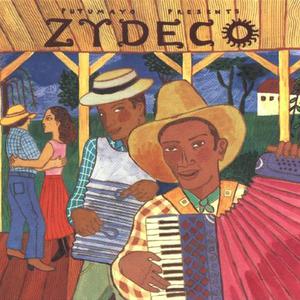 Biography of Chris Ardoin The name Ardoin has been "legend" within the Creole/Cajun music community for over a century. Amede and Alphonse "Boi Sec" Ardoin are two Creole musicians whose music influenced many, if not all, Creole/Cajun artist's music heard today. Chris Ardoin, the next generation of many Ardoin musicians, has his own unique sound that has dancers and music lovers craving him, packing Southwest Louisiana and Southeast Texas clubs, churches, dance halls, trailrides, and festivals.

He blends the traditional Creole music with r&b, rock, jazz, blues, country, and gospel. Chris was born and raised in Lake Charles, Louisiana where he still resides today and attends McNeese St. University. He started playing the accordion at the young age of four and by the age of nine he had already played Carnegie Hall in New York. And by fourteen he had performed for over 500,000 people at the Monument in Washington D.C. Though he is only in his mid twenties, this 5'11", 205lb man is a well seasoned and respected musician in all genres of music. Chris Ardoin and NuStep has traveled and entertained millions of people over the years not just in the crawfish circuit but also in far away places such as London, Sweden, Amsterdam, Jamaica, Mexico, and even Japan. Chris says, "It's amazing to see how many people are interested in our culture and to see it grow from barely regional to worldwide. The only thing left to do now is to get Zydeco into mainstream America!" Chris does not speak Creole (which some refer to as broken French) but plans to learn. Chris' father, Lawrence "Blaque" Ardoin and his family were born and raised in Duralde, Louisiana and in that area people were born speaking Creole and not English. They had to learn English in school. When the family would get together the adults would speak in Creole so the kids would not know what they were talking about which almost caused the death of a beautiful language. "It is now up to our generation to learn the language and keep our heritage alive," says Chris. Chris' mom, Mary, was raised in Kinder, Louisiana. Her family also has a musical background. Her uncles Charles and the late "Slim" Prudhomme were well known guitarist who played with the late John Delafose and her uncle Willis Prudhomme is a well know accordionist who leads his own band, the Zydeco Express.

After making special guest appearances for a few years with his fathers band, Chris and brother Sean formed their own band, Chris Ardoin and Double Clutchin', with Lawrence's help. The band quickly gained a huge fan base with their infectious, energetic music which led to landing a deal with Rounder Records. In 1995, Rounder Records producer Scott Billington saw the band perform at the Plaisance Zydeco Festival and started discussing business immediately. Chris recorded three records with Rounder in the span of five years. In 1996, the band released "Gon Be Jus' Fine" and in 1998 released "Turn The Page" which was voted OFFBEAT MAGAZINE ALBUM OF THE YEAR. But in 1999, a long overdue talk on plans for what direction the band would be going in between Chris, Sean, and father Lawrence led to a breakup. Chris, at the time a senior at Washington-Marion Magnet High School, had his own vision on what he wanted to do. Music was not the only thing Chris ever wanted to do. Sports was a big part of his life. Juggling between music and sports was the easiest thing and deciding which one will to continue after high school. Sean went on to start Sean Ardoin 'n ZydeKool and Chris kept on trucking with Double Clutchin'. Chris then recorded a third album, "Best Kept Secret", with Rounder and quickly got noticed as a solo artist. Since then, Chris has released three more cd's: Life in 2002, "Save The Last Dance" in 2004, "Sweat" in 2005, "MVP" in 2006, and soon to be released January 4, 2008, "Candyman's VIP". In 2004 after the release of Save The Last Dance, Chris wanted to start over so to speak. Start from scratch and really set his self apart from the Double Clutchin name and do what he wanted the way he wanted to do it, Chris then headed to his studio to start the recording of "Sweat" and changed the name of the band to Chris Ardoin and NuStep. Three months later while at the Rock N Bowl in New Orleans the band was noticed by two movie producers and were featured in a Burt Reynolds movie called "Tempted". Since changing the name to NuStep and creating a brand new sound, the band is at the top of its game. Chris says, "Music has given me more than one can imagine from awards, movies, traveling the world, and most of all giving audiences everywhere the joy of zydeco music. Somehow Chris manages to coach 6-12 year old kids recreational sports in Lake Charles with his busy work schedule but that's to satisfy his love for sports and kids.