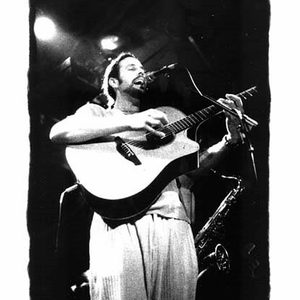 Chris Alastair (say "allister") is a singer/songwriter/guitarist from New York who's now based in London. Though best known for his funny spring-break anthem Spring (is Friggin' Awesome) (see Videos) he's a classically-trained, award-winning songwriter and performer whose recordings span a range of rock, pop, funk, and acoustic styles. Born in in North Africa to American and British parents, Chris was raised in the United States playing brass instruments in jazz bands and youth orchestras and singing a variety of choral work.

Born in in North Africa to American and British parents, Chris was raised in the United States playing brass instruments in jazz bands and youth orchestras and singing a variety of choral work. At Dartmouth College in the late '80s he directed and arranged for an a cappella group and, switching to guitar, wrote his first songs and formed his first band. After two years of graduate school in England (and band no. 2), he moved to Washington DC to work in journalism -- but soon found himself back on the stage and winning his first songwriting accolades.

In the 1990s he built a loyal following in Washington, then New York City, releasing two albums: Ghost in Love and Sah Sex Pleek , the latter a phonetic spelling of the French "ca s'explique". He won several songwriting awards from the Songwriters' Hall of Fame and the National Academy of Popular Music (Abe Olman Award), the Mid-Atlantic Song Contest (sponsored by BMI) and the John Lennon Songwriting Competition. Performing both solo and with a band, Chris was twice nominated for a Washington DC "Wammie" for Best Male Vocalist, Alternative Rock.

Chris is known for clever lyrics, tight arrangements, soaring melodies, and groove-oriented acoustic guitar technique, often in different tunings. Standing tall at 6'3", he quickly establishes a presence with his seven-fret reach and three octave vocal range. His band recordings reveal his dual nature, mixing 'sensitive', acoustic-driven songs with witty, take-no-prisoners hard rock. "Somewhere along the line I discovered the joys of electric guitar driven through a Marshall stack," Alastair remembers. "It was like Jackson Browne being put in charge of a howitzer -- not always accurate, but loud as hell and loads of fun."