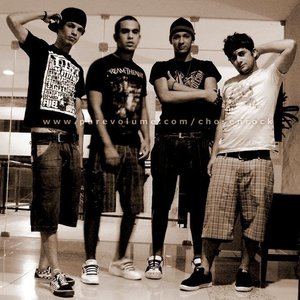 Fusing elements of extreme metal with crushing heaviness, CHOSEN are a band fully intent on taking their multi-layered music to a wider metal audience. Since the group's inception at the start of 2005, these enthusiastic stalwarts have gradually made a name for themselves within the metal community, gaining much recognition and appreciation for their solid musicianship, distinctive songwriting and high-energy live shows. To date they've released four independent and well-received EPs and have just recently relocated half way across the world to Vancouver, Canada.

Formed in Ireland, CHOSEN initially self-recorded and released a trilogy of EPs over a twelve month period, titled Fragment (Piece I, II & III) which were all well received in both local and international press. After regular gigging activities throughout their native country, the band had its sights firmly set on taking things to the next level. In September 2006 they entered Komodo Studios to collaborate with producer Alwyn Walker and recorded three tracks that were released the following year under the title Promo 2007. However, just as things were about ready to take off, the trio of drummer David McCann, guitarist Paul Shields and bassist Matt Gaynor would find themselves having to recruit a new voice for the band.

Having exhausted every option available to them in Ireland, the guys ultimately decided that a complete relocation to Vancouver, Canada would be a more exciting and beneficial option, providing greater prospects for the band in general. As luck had it, their decision was the right one and within weeks of announcing the news started receiving offers from many different singers across the water. Among the interested applicants was Canadian vocalist John Matter, who after an in-depth audition, successfully joined the ranks of CHOSEN.

For The Glory Of The Empire