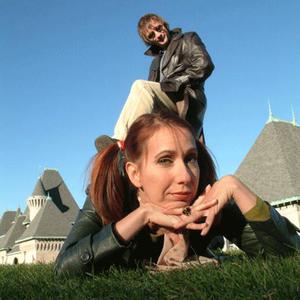 CHIWAWA is Laurie, the daughter of Hungarian immigrants, and Krassy, born and raised in communist Bulgaria. The two first met when Laurie unwittingly auditioned for a newly arrived in Canada, Bulgarian band called Ping-Pong (later becoming The Clouds). Within 3 months of their meeting Krassy was being deported and Laurie had no choice but to save the band. What started out as a "greencard marriage" blossomed from desperate measures into true love and the couple settled into the Bohemian culture of Montreal, Canada.

CHIWAWA was formed in 1994 by Laurie Gordon (vocals, keyboards) and Luc St. Pierre (keyboards, programming). In 1996 Krassy Halatchev (bass, programming) joined the band, followed by Eric Willis (guitars), in 1997. Their debut album, The Sick World Of Yona, was released in 1998. It was produced by Steve Whitfield who has worked with artists like The Cure and The Mission.
By 1999 Chiwawa was essentially a duo (L. Gordon & K. Halatchev). The band has recorded 4 full length albums and several EPs since 1997. Their latest album is called Bus Stop Chinese Buffet. It is scheduled for release in early 2009. Chiwawa was also featured on a few compilation releases (CHOM's Esprit, Darkcell). The band has its own record label, Satellite Records Canada (SRC).
CHIWAWA's songs Overcast Skies, Do It For Me and God's Children are the soundtrack for Spare Change by Oscar nominee, NFB wunderkind, Ryan Larkin. Laurie is the producer and co-director of this famous animator's comeback film.

The Sick World Of Yona