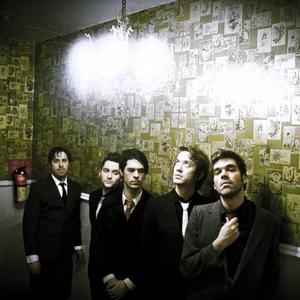 There are at least 4 bands by the name of Chinatown. 1) The first being a NWOBHM band. CHINATOWN was borne out of guitarist Pat Shayler and bassist John Barr's departure from college band JODY. Beginning life as the Glam influenced CHINASTREET, this Fareham, Hampshire based band soon switched to a more direct approach. CHINATOWN's debut line up found the band fronted by vocalist Steve Southern with Shayler and Barr joined by keyboard player Adrian Chase and drummer Russ Payne.

1) The first being a NWOBHM band. CHINATOWN was borne out of guitarist Pat Shayler and bassist John Barr's departure from college band JODY. Beginning life as the Glam influenced CHINASTREET, this Fareham, Hampshire based band soon switched to a more
direct approach. CHINATOWN's debut line up found the band fronted by vocalist Steve Southern with Shayler and Barr joined by keyboard player Adrian Chase and drummer Russ Payne. A major line up shuffle resulted in the keyboards being ditched in favour of second guitarist Danny Gwilym, Southern being ousted by Steve Pragnell and Steve Hopggod taking over the drum stool. Hopgood had previously been in SHY, a Portsmouth based outfit that also featured lead vocalist BRIAN HOWE, later to find fame fronting BAD COMPANY. CHINATOWN soon became noted for the distinctive vocal style of Pragnell and the quintet was quick to release the sought after 'Play It To Death'
album, which was recorded live.
A further 'Friday Rock Show' session followed. Taking on UFO publicist Heidi Kipling the band demoed tracks for EMI but this union faltered. The band pulled in erstwhile TYTAN guitarist Steve Gibbs but CHINATOWN fragmented sometime after. Bassist John Barr was ousted in early 1983 and whilst he would go on to play in an assortment of London based club bands. Gwilym later turned up as part of Gloucestershire's TYRANT then SHOGUN whilst Steve Hopgood journeyed through PERSIAN RISK, BATTLEZONE, JAGGED EDGE and KILLERS. Pat Shayler formed EXXPLORER and, upon their demise in 1986, reformed CHINATOWN with Pragnell, ex-BLACK ROSE and CHINATOWN bassist Martin Rahn, ex-CHINATOWN keyboardist Chris May and former BERLIN drummer Marc Angel. The 'Play It To Death' album has since been re-issued in Japan, in CD form, by the Vinyl Tap label, bolstered by both sides of the 7" and the 2 "Reading Rock" LP tracks.

2) Chinatown is a francophone pop rock band based in Montr?al, Qu?bec, Canada. The story behind Chinatown is linked, not so much to the movie of the same name starring Jack Nicholson, but to the The Stills, an anglophone band from Montreal that contributed to the formation of the reputation of Montreal as a mecca of alternative music with the release of their first album in 2003, Logic Will Break Your Heart. F?lix Dyotte, the guitarist, was in fact a member of the ska ancestors of The Stills, The Undercovers. Furthermore, it was Chinatown that wrote Retour ? Vega, a song that serves as a financier to the band thanks to its song-writing money. F?lix Dyotte first joined Pierre-Alain Faucon (piano) and then Julien Manaud (guitar and vocals). Since then, the band has released two mini-albums: Mes Long Beach and a self-titled disc.

3) Chinatown is a hip-hop band from Santander, Spain

4) Chinatown was "born" in a living room in the spring of 2001 in Vancouver, B.C. Canada. The band connected right away, writing catchy rock songs that appealed to classic rock and underground rock fans. Not long after that, they started gigging around the B.C. area. In a short time, the band was able to pack the local clubs with fans of all walks of life. They shared the stage with many national and international acts like L.A. Guns, Zeke, The Makers, Zen Guerilla, The Avengers and loads more. With the strong local success in B.C., the band landed a full tour as an opener for Sub Pop / Liqueur & Poker recording artist, the Black Halos. Chinatown developed a reputation as one of the "must see" live bands with their high energy, sleaze rock sound.

The self-titled debut cd is packed with fuel injected, straight ahead sleaze rock with no filler. The band's sound has been compared to New York Dolls, Guns N Roses, Backyard Babies, The Faces & classic 70's Aerosmith. Great classic 70's guitar riffs with 80's hard rock solos that would make Slash proud. Also added with the spirit of 70's glam rock, Chinatown is the new movement for sleazy hard rock of the new millennium. It's all about the rock!

Play It To The Death